$30 tickets for 30 Under 30 members, vist their website for more info 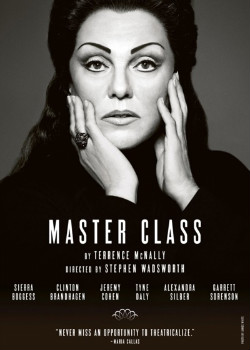 BOTTOM LINE: Master Class is a dramatization of one of the workshops Maria Callas hosted late in her career, in which her character is revealed through interaction with the next generation of singers and through flashbacks to high points both professionally and personally.

Based on a series of master classes Maria Callas held at Lincoln Center at the end of her singing career, Master Class illuminates the life and struggles of the greatest opera singer of her generation, a controversial woman who overcame great adversity, revolutionized opera performance, and experienced a tragic love life of grand proportions.

Callas’s life is ripe for dramatization. Born in New York City, her mother whisked her away to Greece as a girl so she could study music at the conservatory in Athens. She endured WWII and the German occupation of Greece, only to suffer an inauspicious start to her career — she was fat, and her unique style was not initially appreciated. She eventually dropped the weight, but spent the majority of her prime years in a loveless marriage, focused on creating great but taxing performances for La Scala. She fell in love with Aristotle Onassis, the richest man in the world, only to have her heart broken when he threw her over for a more politically advantageous alliance with Jackie Kennedy. Callas’s career ended, her voice declined, and she died a lonely, reclusive woman in Paris; her only friend was an Eve Harrington-type who stole a large portion of her fortune.

Yet Master Class is not a bio play, it simply uses the rich earth of Callas’s history to fuel a moment in time. The audience meets Callas after most of her torments are behind her, when she is left a faded star, living with the scars of a ruthless life.

What excites me about McNally’s script is the duality between the fantastical and the mundane. The play is set in a classroom where opera students are coming out to sing for Maria Callas. And yet in this banal scenario, high drama is brought by Callas’s nature and by her remembrances. Each student’s aria parallels emotions and incidents in Callas’s past. Memories are triggered, and the audience is taken with Callas through the emotions and resentments those memories left behind. McNally cleverly uses repetition and deconstruction of the text of arias to heighten the audience’s emotions and reactions to operatic levels, so that moments of epic proportion can be created in the midst of what is really just an afternoon class.

Maria Callas, la divina, once the most famous singer in the world, was an international celebrity and diva of the grandest stage (both literally and figuratively). To pull off a recreation, an actress must equal the diva’s dynamism and phenomenal presence. Frankly, you need a star. Enter Tyne Daly. Daly turns in a terrific performance and holds the audience captive for the full two hours. She owns the stage and the space, encompassing the charisma and confidence required to portray one of the most famous women of a generation. Daly brings biting humor, assurance, and charm to this unabashed figure.

Director Wadsworth has overseen a seamless production of this script, with set, lighting, costumes, and sound all coming together beautifully to create a metatheatrical world where we can transition between a reality where the audience is involved as part of the show and a memory space. I found Thomas Lynch’s set to be particularly functional and theatrical, both a glossy studio space and a smoky dream world. The show is as lovely to watch as is Tyne Daly’s performance.

One thing will help audience members with this show: brush up on Callas and opera before coming. The show is effective even without knowing this background, but I found it easier to follow having researched Callas, and I wished I had done more research into the three main arias discussed during the play: Ah! Non credea mirarti from La Sonnambula, Vieni t’affretta from Macbeth, and Recondita armonia from Tosca.

Master Class, a seemingly simple play with music, manages to be as magnificent and impassioned as an opera, and this production brings the script to life beautifully. Tyne Daly gives a career performance, leading a charming supporting cast. This is a show worth seeing.

(Master Class plays through September 14, 2011 at the Samuel J. Friedman Theatre, 261 West 47th Street at 8th Avenue. Performances are Tuesdays at 7PM, Wednesdays through Sundays at 8PM, and Wednesdays, Saturdays, and Sundays at 2PM. Tickets are $57 through $116 and can be purchased at the box office, by calling Telecharge at 212.239.6200, or by visiting Telecharge.com. For more information, visit ManhattanTheatreClub.com.)