Written and performed by John Fleck; Directed by Ric Montejano
Produced by The Katsales Theatre Company 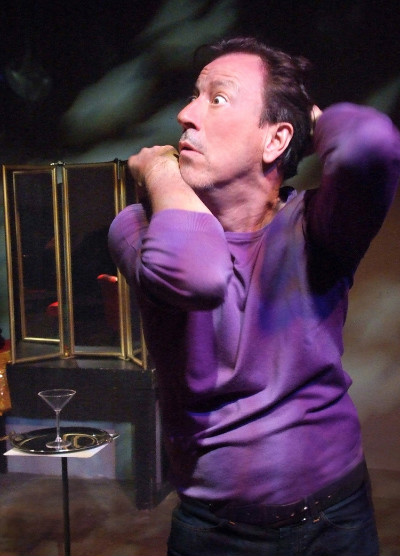 BOTTOM LINE: Mad Women tells the growing-up story of John Fleck reflected by the lives of the two most important women in a gay man's life: his mother and Judy Garland.

For La Mama’s 50th anniversary season, they have brought back an old favorite from the West Coast: performance artist and professional portrayer of non-humans John Fleck. This visit, Fleck brings Mad Women, a new show he conceived, wrote, and performs with director Ric Montejano. Produced by The Katsales Theatre Company, the original run at The Skylight Theatre in Los Angeles received rave notices from local critics.

John Fleck is best known as Gecko on Season 1 of HBO’s Carnivale and for playing a record number of aliens in the Star Trek series. He is also a prolific performance artist whose self-scripted pieces include Side EfFlecs May Include. . . and Johnny’s Got a Gun.

Mad Women takes the audience on a whirlwind ride through episodes in the lives of Judy Garland, Josephine Fleck, and the people around them, but ultimately tells John Fleck’s own story. Fleck gives a fearless performances, sometimes madcap, sometimes calm, but always compelling. He takes on characters both remembered and dramatized and invites the audience into his own mind’s eye.

Performed on a beautiful representational set, Mad Women starts at the Coconut Grove in 1967 where Judy Garland is giving a late career performance. At this point he plays himself, Judy, and her son Joey in sometimes rapid succession. It’s a theatrical, riveting opening, initially awkward for the audience, but in an affecting way. The crowd is so quickly thrust into the action of the performance and the visceral energy of Fleck, that it takes time to catch up and react.  But the intricacy of the performance and the story told tempered with Fleck’s own charisma help to ease the transition. And while a gay man talking about Judy isn’t novel, Mad Women is witty without being redundant or treading over-worn ground.

After the Coconut Grove episode, Mad Women takes a shift. The performance becomes less of a dramatic narrative and more of an autodrama. Fleck segues from Judy into the story of his mother Josephine Fleck who struggled with Alzheimer’s. This leads into incidents from Fleck’s childhood and old wounds from hurts inflicted by his alcoholic father. Fleck is able to reflect on what these events mean for him today, and how he has gotten to this place in his life.

Mad Women takes advantage of video and audio recordings of both Judy Garland and Josephine Fleck along with live music. Sometimes Fleck performs this material, sometimes he presents it, but it is always part of the story he is telling. Fleck and Montejano devise highly creative uses for most every prop on stage and a jocular audience interaction.

In Mad Women, the parallels between Judy, Fleck’s mother Josephine, Judy’s son Joey, Fleck’s father, and Fleck himself are muddled, making it less an “us/ them” phenomenon and instead huddling these various different people together to show that they all struggled and were all associated as human beings trying to overcome situations.

Mad Women made me laugh out loud and wipe tears from my cheeks all in the course of one hour, and isn’t that exactly the what we go to the theatre for? The story is a fresh, thoughtful take on growing up, being gay, and overcoming what is past.