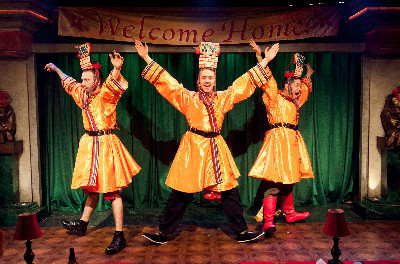 BOTTOM LINE: An irreverent romp through a pseudo-Eastern European, wannabe Western culture that makes for an all-around enjoyable life-layover.

Though layovers have recently become the choice options for longer air travel journeys, The Berkserker Resident’s fictional country of Lapsburgh is certainly not one that should be getting a stopover pathway through it anytime soon. The Lapsburgh Layover, now playing at Ars Nova, is a quick jaunt through the the fictional Lapsburgh, which quite enjoyably proves beyond a doubt that, despite the heartbreakingly hilarious and darling attempts of the locals to woo layover passengers with the charms of Lapsburghian tourism and culture, Lapsburgh might need a little further development before attracting those mainstream flight paths.

“Welcome home?” declares the banner slung across the stage in Lapsburgh’s cultural embassy, the arrivals/waiting area for the recently de-planed audience members who await aircraft repair. All chintzy glitter and glitz, the room glistens with slightly off-kilter attempts at Westernisms, such as the banner, as well as bombastic displays of this fictional, but ever so familiar and more than slightly Eastern European, culture. This happy holding chamber of Lapsburghs and Lasburghisms is revealed after a short jaunt through airport security and passport control, assuring the mutual safety of citizens and travelers alike. Thanks to some airplane malfunctions on the flight that brought this audience together, we’re all stranded here in Lapsburgh for as long as it takes to fix the aircraft, which, as these situations usually do, gets more dire as the evening goes on. But no matter! These happy, smiley Lapsburghians are thrilled to entertain us in the meantime, with a fun little American-style noir dinner theatre piece they happened to have been working on (a charming little number that falls on the gamut somewhere between The Maltese Falcon and Guy Noir), with a few pro-Lapsburgh tourism remarks stuck in here and there for good measure. But we laidover passengers are not the only tourists in the area this evening; the presence of some rather unwanted guests, who get more and more disruptive as the night drags on, rather spoils the good time being had by all.

The Berserker Residents, currently Company-in-Residence at Ars Nova, have crafted an entirely enjoyable spectacle. Each of the four performers, who are all co-wrote the piece, commit as fully to their hilariously absurd Lapsburghian counterparts as they do to their dinner theatre Film Noir charicatures. The script is quick and rife with delightful mistranslations and American taglines, delivered with zeal by the talented foursome. Their dedication allows the audience full immersion into this bizarrely absurd but familiar world. Worth noting, too, is that much like the actors, the space has been used to its full potential, including some bonus, nontraditional parts of the Ars Nova space.

This brief foray into the Lapsburghian lifestyle is all-around amusing: a little bit of a dig at the absurdity of air travel in this day and age, a little bit scouring the internet for desperate (though always smiling) third-world country’s tourism videos, and a little bit of a zany fever dream seemingly inspired by Prairie Home Companion, the layered elements of the piece are all equally enjoyable, funny, and well done. Overall, The Lapsburgh Layover offers an amusing hour or so of goofy goodness, full of mystery-genre spoofing and wholeheartedly committed comedy, all amounting to a very satisfactory evening adventure.  And do yourself a favor: be sure to order a Fancy Bicycle cocktail to sip before sitting down to watch the show.

(The Lapsburgh Layover plays at Ars Nova, 511 West 54th Street just west of 10th Avenue, through September 24th. Performances are Tuesdays through Saturdays at 8 PM. Tickets are $30 and are available at arsnovanyc.com or by calling 212.352.3101.)