Written and Performed by Christopher Borg and Joey Rizzolo; Directed by Justin Tolley 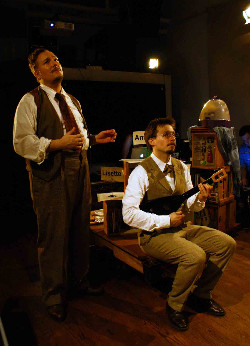 Christopher Borg and Joey Rizzolo in the New York Neo-Futurists' production of LOCKER 4173b. Photo by Anton Nickel.

BOTTOM LINE: A fascinating yet heart-wrenching story that will move you from laughter to sadness in an intense emotional rollercoaster, one you will still be pondering several days later.

Picture yourself dead for a minute. A sudden death. A death which did not give you time to put your affairs in order, to tidy your room or to sort your papers for the year’s tax return. You’ve left behind a heap of possessions, some as meaningless as a grocery receipt from your local supermarket, or a rosé bottle of wine you’d been saving for the spring. Others as prized as your old family photo album and your daily journal where you’ve secretly poured out your thoughts. Now picture them being heaped into a large locker, in no apparent order, and put under lock and key. What story would these items, your items, tell to someone who opened that locker? What would they think of you?

Christopher Borg and Joey Rizzolo, the show’s writers and main actors, precisely embarked on such a journey to explore the lives of two unknown families through their apparently forgotten possessions. In order to write the play they went to a default locker auction at a storage location in the Bronx and bid on the contents of two lockers. With almost archeological zeal they meticulously catalogued each of the more than 1500 items, no matter how seemingly worthless, and set on the mission of piecing together the lives of the proprietors of these possessions. The result of this investigation is the New York Neo-Futurists' production of Locker 4173b. Rizzolo and Borg play "Joey" and "Borg" (essentially, themselves) as a couple of cultured, curious and creative urbanites with a little too much time on their hands. Clad in some ridiculous explorer uniforms, they present the items to us in the form of a museum exhibit, delivering their explanations with the extravagance and passion of real explorers embarking on a journey of discovery.

One of the highlights of Locker 4173b is the playful interaction between two characters who complement each other almost to perfection. Borg is the more emotional and idealistic of the two (wait till you see his mustache), while Joey is his more rational and intellectual counterpart. Their old fashioned attire, which makes them look like they have just emerged from an Indiana Jones movie, and the amusing contraptions with which they analyze the “evidence,” means that just looking at these two is enough to have you roaring with laughter. Through witty banter, interesting side notes, and grandiose assertions, they present their inferences about these possessions in a uniquely hilarious fashion.

However, as the first scenes pass and the stories of the people who rented the locker unfold, the play starts to lose its light-hearted nature. We are taken on a heart-wrenching journey filled with the personal tragedy of strangers who soon become people we care about and feel for. The reality of a family stricken by poverty, mired in debt, and struggling with responsibility suddenly becomes inescapable. We see Borg and Joey wrestling with these items, trying to read the subtle clues about people about whom we now know so much. I almost found myself begging for something, anything, that might give a tiny glimmer of hope that things might have not been so bad. This intense emotional attachment, at times almost breathlessness, is masterfully achieved by Borg and Rizzolo's compelling and consistent acting during all the different moods and moments of the story.

The deliberate intentions of the authors to place these stories in the context of modern 2010 post-recession America is only partially successful. Although distressing, stories like these are unfortunately quite common for our times. What makes this story resonate so deeply is not the present context, but rather the fact that these struggles are made so personal through the various possessions of the families. And even though Joey and Borg reveal a suprising amount of detail about their own personal lives as writers, I still wonder if this absolves them of some hefty charges of invasion of privacy.﻿

Locker 4173b is a powerful and thought-provoking production which explores the “story” of possession, presenting a more personal side to the tragedy of poverty and default. While I imagine that Borg and Rizzolo took some creative license in their writing, the fact that this could be a true story just adds to the strength of the narrative and the creative endeavour that led to this play. Regardless of whether your heart is bleeding for a poor Bronx family or whether you are shocked by the modern demise of privacy, be prepared for an unforgettable emotional joyride in the small but charming space of The Monkey. Locker 4173b is a gem in the New York theatre scene, and at only $16, I highly recommend this thrilling voyeuristic adventure.