Off Off Broadway, Musical Revival
Runs through 11.13.11
The Gallery Players, 199 14th Street, Brooklyn 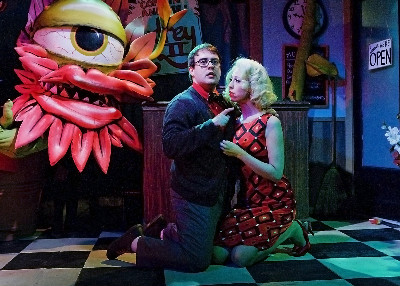 BOTTOM LINE:  A great show, but a sadly uninspired re-staging despite many talented artists.

I’ve lived in Park Slope for almost a decade and have never gotten around to venturing over to the other end of my neighborhood to catch something at neighborhood staple, The Gallery Players. While every now and then something catches my eye, usually a staging of a long-gone Broadway musical, for whatever reason, the quick jaunt on the B67 has never come to fruition -- that is, until I saw that they were doing a production of Little Shop of Horrors. I have for some time had a hankering to see this show again. The score has been a part of my musical theater playlist for as long as I can remember (even before such things existed), and I was disappointed by the lackluster Broadway revival in 2003 (starring Hunter Foster and Kerry Butler).

To my surprise, The Gallery Players doesn’t feel like an off off Broadway theater. Located in a building that is reminiscent of a suburban high school (and probably because it's not in a Manhattan high-rise), it invokes the feel of a small community or summer stock theater. It is a somewhat mixed blessing that their production of Little Shop of Horrors also comes across as such. I’ve had the chance to see quite a bit of off off Broadway theater, and although the standards vary widely, it seems that there are two redeeming cornerstone values: either brand-new material, or a new take on old material. This production is neither of these, rather it's more obvious than inventive, and this feels very true to the vibe of the venue.

The set is functional: a dreary depiction of Skid Row, as it should be. The performances range from decent to stellar. The Audrey II puppets, which have the potential to be the centerpiece for any performance of Little Shop of Horrors (this man-eating, rapidly growing plant is at the center of the drama, after all), are fun but overly choreographed, and the choreography, on the whole, is a little heavy-handed. Almost every aspect of this show is right down the middle, neither good, nor bad, just sort of there. The problem isn't a lack of talent so much a lack of vision. Each design aspect is put together quite nicely (with the exception of sound, only half the lyrics were audible due to over amplified band and actors without mics) and the actors all seem very competent.

The brightest spot in this production is Emily McNamara as Audrey. McNamara has hit the sweet spot between over-the-top and intensely sincere that is so important in a campy show like this. Her acting is speckled with moments of perfect timing, a tilt of the chin here, a dramatic pause there and a selective grating accent that she uses as a wonderful tool. Where McNamara really shines however is in Audrey’s two ballads, "Somewhere That’s Green" and "Suddenly Seymour" (a duet with Philip Jackson Smith as Seymour). Both songs are sweetly heartfelt and McNamara allows the character to be naturally comedic in these moments instead of stretching for overplayed silliness.

This production of Little Shop of Horrors would be perfectly suited for the middle of the country, where access to Broadway wasn’t literally right over a bridge. Maybe I'm just overly expectant for exciting new interpretations of beloved theatre staples in New York City, but this Little Shop of Horrors is just a little too safe for my taste.

(Little Shop of Horrors plays at The Gallery Players, 199 14th Street, Park Slope, Brooklyn, through November 13, 2011. Performances are Thursdays, Fridays and Saturdays at 8PM, and Sundays at 3PM . There will be additional 2PM matinees on November 5th and 12th. Tickets are $18, or $14 for senior and children under 12. To puchase tickets visit galleryplayers.org. For more show info visit galleryplayers.org.)