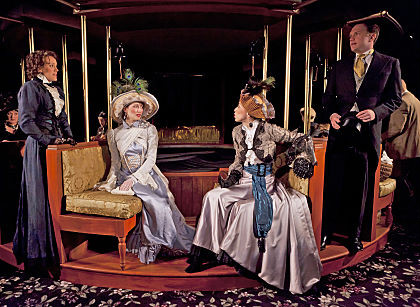 Rachel Crothers was one of the most successful American playwrights of the early 20th century; nearly 30 of her plays were produced on Broadway between 1906 and 1937. In 1921, she provided Katherine Cornell and Tallulah Bankhead with their first important roles in her play Nice People. In 1930, she was cited by Ira M. Tarbell as one of the “50 Foremost Women of the United States.” In 1939, she was awarded the Chi Omega national achievement gold medal by Eleanor Roosevelt. And in 1918, another of her plays, A Little Journey, opened on Broadway, ran for 252 performances, went on to tour the country, and was nominated to receive the first Pulitzer Prize for Drama. Yet today, A Little Journey and indeed Crothers herself might be all but forgotten were it not for the efforts of the Mint Theater Company. The Mint revived another of her plays, Susan and God, to considerable acclaim in 2006, and now appears to be on the verge of achieving a similar success with its current revival of A Little Journey. And for this, we owe the Mint Theatre Company, whose mission is to produce “worthwhile plays from the past that have been lost or forgotten,” an enormous debt of gratitude!

A Little Journey is a wonderful play which should have been revived long before this. And the Mint Theater has done a truly first-rate job with this revival – in casting, set design, direction, costuming, and performances. This is one terrific production which can be enjoyed by anyone with an appreciation of theatre (but most especially by those whose tastes run more to the traditional than to the avant garde).

Set in 1914 inside a Pullman sleeping car on its way from New York City to the Pacific Coast, A Little Journey is an inspirational comedy focusing on the relationships that develop among ten travelers thrown together on a four day trip, and concerns the fundamental decency of human nature, second chances, and the redemptive power of love, labor, and caring for others. The play centers on Julie Rutherford (Samantha Soule) who, having just broken up with her boyfriend Alfred Bemis (John Wernke), is heading out to Montana alone to live with her brother and his large family, believing that her life might well be over. On the train, she meets Jim West (McCaleb Burnett), a Good Samaritan who, having prevailed against his own personal demons in salvaging his own life, now seeks to do the same for others.

The other passengers on the train are something of a motley crew. They include Mrs. Bay (Rosemary Prinz), a feisty, slightly hard-of-hearing old lady and Lily (Chet Siegel), her lovely, young and relatively innocent granddaughter; Mrs. Welch (Laurie Birmingham), a pseudo-sophisticated self-centered busybody; Annie (Jennifer Blood) an unmarried mother traveling with her infant daughter and presumably seeking to reconnect with the baby’s father, Bill; Leo Stern (Craig Wroe), a traveling salesman whose ostensible line is men’s pants but might as readily have been snake oil; Frank (Ben Hollandsworth) and Charles (Ben Roberts), two callow college youths; and Mr. Smith (Douglas Rees), a narcissistic  plutocrat who may be more than a match for Mrs. Welch. Also present on the train are the Conductor (also played by Douglas Rees) and the Porter (Anthony L. Gaskins). Julie's friends Kittie Van Dyck (Victoria Mack) and Ethel Halstead (Joey Parsons) appear early in the play to see her off but do not accompany her on her journey.

The play’s story line is rather predictable (although there are some surprises) and plot structure is not its great strength. Rather, its value resides in its allowing us to tread familiar ground so well, bringing us close to the edge of cliché but never quite pushing over, and providing us with an opportunity to share the characters’ most human experiences. A Little Journey has more than a dozen wonderful roles and the entire cast does an exemplary job of bringing all of them to life.

Roger Hanna's set also deserves special commendation. The train’s Pullman sleeping car is depicted not as a linear means of transportation moving on and off stage but rather as a revolving carousel – a creative solution to a variety of potential problems.  For one thing, it makes maximum use of limited space. For another, it allows audience members to see what is happening in different places on the train at the same time.  Additionally, it evokes a sense of the claustrophobia that must have affected rail travelers at that time. And best of all, it adds a delightful whimsical touch to the whole endeavor.