$20 and are available at

Written and Directed by Zack Russell

Off Off Broadway, Play
Runs through 6.6.11
The Flea Theater, 41 White Street 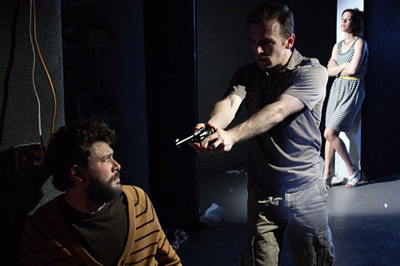 BOTTOM LINE: Despite an uneven tone, Just Cause offers a comedic look at directionless youth today who are willing to explore terrorism just to find a purpose.

The title to Zack Russell’s play Just Cause might serve as the response the young terrorists at the center of the story would use to explain their actions -- including kidnapping and an attempt to blow up the Empire State Building -- which seem to serve no underlying political ideology, instead just giving listless youth something to do.

Russell considers this work to be a response to the 1979 film The Third Generation, which explored the political climate in Germany during the 1970’s in which political activists and terrorists took action without clear cause or forethought. Russell applies this idea of thoughtless action to modern day Brooklyn, focusing on six twenty-somethings supported by their upper-middle class parents, who, in lieu of employment, become laughable revolutionaries, recruited and controlled by a man known as August (Greg Engbrecht).

Russell authentically captures l’ennui of listless twenty-somethings, lost in an economically unsteady world that now offers them limited possibilities in terms of professional direction. Unlike their parents' generation, they cannot be sure of employment after college. Instead this group is mostly unemployed or underemployed, relying on support from their parents and small paychecks from jobs in retail and at restaurants. The fact that they fall so easily into the hands of August and his revolutionary cohort Paul shows just how desperate they are for some sort of direction.

August and his security software company give the band of directionless young adults a glimmer of idealism by motivating them to plot to bomb the Empire State Building and eventually kidnap a woman named Blackwater (Cynthia Whalen). The group thinks they are working towards some semblance of freedom in their confusing lives, but really they are only carrying out the security company’s desire to maintain public fear. The naïve twenty-somethings jump upon this opportunity eagerly, embarking on raids and giving themselves revolutionary names. One especially humorous member of the group (Katherine Folk Sullivan) who has studied Latin American revolutions deems herself Carmen Velacruz.

The group’s actions are painted both as being dramatic and frightening, while at the same time comedic. While on the one hand Russell seems to be commenting on today’s searching youth, he also seems to be commenting on the fact that large modern populations can be easily mobilized via sites like Twitter and Facebook. However, unlike in other countries where social media has become an effective tool for change, it has yet to do much in America where social media is instead more commonly used to mobilize youths for things like flash mobs and giant pillow fights.

Just Cause paints an amusing portrait of directionless, entitled twenty-somethings -- one that certainly rings true for anyone who has encountered much of the young transplant population of Brooklyn -- naively looking for a raison d’etre in the wrong places. The work could have been given more relevance to current politics and events, capturing perhaps a clearer, more specific portrait of today's young adults. The constant shift in tone from serious to comedic also leaves one wondering what Russell’s overall vision is. Russell (who also directs the piece) stages his work well, making party scenes and group conversations seem realistic, and skillfully allowing voices to be heard over others. The cast itself also gives a strong performance, pulling plenty of laughter from the script. Overall, Just Cause offers a humorous look at a generation looking for their own revolution and direction.