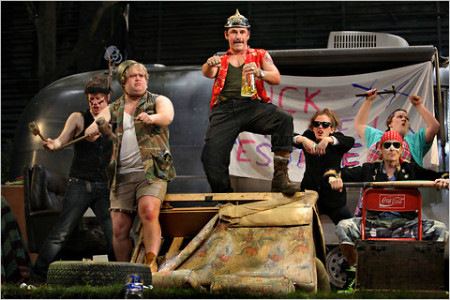 The cast of Jerusalem. Photo by Sara Krulwich for the NY Times.

BOTTOM LINE: A thrilling yet sentimental play that is worth a look in and of itself, but mostly because it's a significant showcase for some remarkable performances.

It’s incredible how much whimsy, energy and optimism are evoked in Jerusalem, fitting merely into the ramshackle front yard of a trailer home. The trailer belongs to Rooster, played by the phenomenal Mark Rylance. Jerusalem tells the story of this aged local legend and the ragtag bunch of youth that both idolize him and mock him.

Jerusalem isn’t the type of theater that is easily consumed and then neatly placed onto a shelf, fully digested and understood. It’s three acts, sometimes slow, sometimes riveting, and takes time to sink in and fully germinate. Heavily influenced by English myth and folklore, Rooster’s character is a modern day Puck, a pied-piper of wayward adolescents and a drunken, charismatic, charming degenerate. The story doesn’t so much drive forward as it meanders. The main plot follows Rooster as he interacts with the community's teenagers. He is part father figure, part friend, part drug dealer and part magician to the wayward youth of the town. On the surface he is a drunk has-been, but in reality his character is not quite what it seems. There are several subplots, but Jerusalem isn’t much about action and the subplots seem irrelevant at times.

If the plot feels a bit passé, the characters feel immediate and multi-faceted. There is no question that the first and foremost reason to see this play is Mark Rylance’s portrayal of Rooster. He attacks his work with a rabid intensity that makes it difficult to take your eyes off of him. I found myself watching him even when he wasn’t necessarily the focus of the scene (which is rare). Seeing Rylance physically embody the scruffy, slightly repulsive, endearing character of Rooster is a master class unto itself. His performance is without reserve, the best portrayal of any character I’ve seen on stage in quite a while.

While Rylance is the centerpiece of this production he isn’t the only delight of the play. The sizeable ensemble is full of energetic and skillful performances. John Gallagher Jr. as Lee and Mackenzie Crook as Ginger are two standouts. The set, designed by ULTZ is also worth a view. If nothing else, Jerusalem is engrossing. The audience is fully immersed in the world of the play. A full trailer sits on stage while a chicken scatters about in a chicken coop below it. Towering realistic, or perhaps even real trees, densely pepper the set and the end result makes the audience feel like they’re peering into a forest instead of onto a stage.

It is worth reading the program notes about the mythology, even if you aren’t a program note reader, as they go far in framing the work. Jerusalem is clearly an English play; the characters speak in an English dialect not entirely familiar to the American ear, the class of people on stage are uniquely English and most relevantly it is deeply rooted in English mythology, but it isn’t so specific that it’s inaccessible to an American audience. It’s also not a play that necessarily hits home right away. It took me several days after I left the theater to really come to terms with its beauty, but at the end of the day, I think the marinating process is part of Jerusalem’s magic.