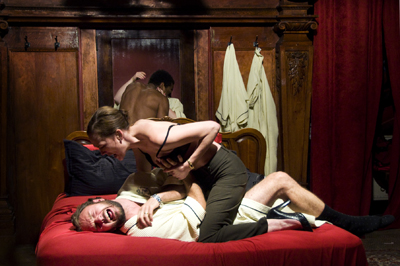 If you’ve got a night and are into unconventional theatre, Hotel/Motel should be at the top of your to-do list. This self-described “intimate experience of epic proportion” is that and more. Presented by The Amoralists, Hotel/Motel contains two full-length plays: Pink Knees on Pale Skin by The Amoralists’s own Derek Ahonen, and Animals and Plants by cult favorite Adam Rapp. The stories are totally different, but both take place in a hotel (or, a motel) -– hence, why they’re presented together.

To make the experience even more engaging, Hotel/Motel is staged at The Gershwin Hotel. Although it doesn’t take place in an actual hotel room, the playing space is set to look like one, and it’s just slightly larger. Each performance offers about 20 seats around the perimeter of the room. So you are close to the action…really, really close to the action. Here’s the good thing: these are not self-aware plays. There’s never an intention to mess with audience members or teeter between fiction and reality, and the first play never even breaks the fourth wall. Even though you’re right there with the characters, there’s really no discomfort or self-consciousness.

The plays are similar in tone: both offer insight into troubled characters coming to terms with their bad behavior. Both are very funny, very quirky, and very disturbing. Both inject a sense of anticipation for trouble to come.

Pink Knees on Pale Skin tells the story of Dr. Sarah (Sarah Lemp), a sex therapist who counsels patients by planning orgies intended to save marriages and overcome sexual issues. This particular night has the Wyatt Family (James Kautz and Vanessa Vache) meeting with the Williams Family (Byron Anthony and Anna Stromberg) in a fancy hotel. Dr. Sarah and her assistant/husband Leroy (Jordan Tisdale) orchestrate a series of exercises to get to know the couples and help them work through their issues (infidelity and resentment for the Wyatts, and the inability to achieve female orgasm for the Williams'). Things go awry when Dr. Sarah becomes the most troubled one in the room –- she’s great at her job, but it can’t make up for her own inner issues.

Highly sexual, Pink Knees offers a voyeuristic glimpse into these characters lives at what’s likely to be one of their most awkward experiences. Their unease and Sarah’s manipulation of their emotions make for great comedic moments. The cast embraces every opportunity to give the audience a laugh and let the humor seep through the story. The ending changes vibe, however, as the focus shifts from the patients to the doctor. A surprise visit sheds light on Sarah’s issues, but the reasons for her subsequent (and past) behavior is never really explained. I would have enjoyed some motivational clarification, especially since the play becomes nearly somber at this point.

Animals and Plants shows two drug traffickers in a motel room in the mountains in North Carolina, waiting for their supply to arrive to they can head home to New York. Dantly (William Apps) and Burris (Matthew Pilieci) have been friends and partners for a decade, and their relationship is endearing. But Dantly has been experiencing some changes recently; it appears he’s losing his grip on reality (storing inanimate objects down his pants is just the tip of the iceburg). Burris encourages Cassandra (Katie Broad) –- a head shop employee the pair met earlier -– to visit Dantly, which she does. But the small town has its own secrets, and Cassandra’s homicidal ex-husband takes residence in that very motel. Dantly probably doesn’t have long to live. And he probably can't trust anyone either.

To enjoy Adam Rapp’s work is to indulge in the fantastical world he’s created -– a world that might not always make sense. True to his style, Animals and Plants is weird and sometimes undefined. Although this play was written years ago, Rapp was excited about The Amoralists's interest in a re-staging, and he directed this production. The world that is created is highly theatrical (falling snow, taxidermy, gore and blood) – although this would be thrilling in any theatre, it’s remarkably well executed in such a tiny space. If you can look past the thick metaphorical weirdness that permeates Animals and Plants and just appreciate Rapp’s imagination and storytelling aptitude, it’s a thrilling ride. And the performances are spot-on.

Hotel/Motel, at 3 hours and 45 minutes, is a theatrical commitment. But it delivers entertainment through selfless plays that really feel they’re for the audience’s sake, rather than site-specific vanity projects (as conceptual productions can sometimes be). These plays could easily be presented individually, but there’s something pleasantly intimate about this double bill. And high production values contribute to The Amoralists’s professional moxie.

(Hotel/Motel plays at The Gershwin Hotel, 7 East 27th Street, through October 10, 2011. Performances are Mondays, Wednesdays, Thursdays and Fridays at 7PM; Saturdays at 2PM and 7PM, and Sundays at 2PM. Tickets are $60 and are available at smarttix.com.  For more show info visit theamoralists.com.)