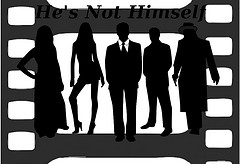 BOTTOM LINE: A fully realized new musical, as sweet as it is cheesy, that needs more than a low-budget festival atmosphere to really explore its potential.

You gotta love a new musical that affixes itself to a historical gem while still trying to construct a unique experience. The creators behind He’s Not Himself have undertaken a massive project, a two-act book musical that is as much a farce as it is a fully developed nod to traditional musical theatre. With a cast of five, an orchestra of three, and a run crew of several, it’s an awfully large endeavor for a summer theatre festival scenario. But the folks at He’s Not Himself are armed and ready, producing what amounts to an entertaining show, impressively polished given its production limitations.

He’s Not Himself is based largely on the little-known George Gershwin musical, Pardon My English, from 1933. In it, Gene (Jimmy Traum), a parking cop, unknowingly gets mixed up in some illegal gangster business when he hits his head and assumes a new identity, as the villainous Teddy the Bear. Gene tries to grapple with his split personality while in cahoots with bad guys Bonnie (Carly Voigt) and Benny (Marc Silverberg, also the playwright), who are out to rob the museum where Gene’s girlfriend Kay (Taylor Sorice) works as a security guard. Hot on their trail is malapropic detective Tom (Dexter Thomas-Payne). Obvious antics ensue.

The cast members are all quite talented and have much opportunity to work their charm throughout He’s Not Himself, which gives near equal stage time to all five characters along with a full musical score. They act, they sing, they dance, they make jokes, and there’s not a chorus in sight to back them up. Particularly notable is Voigt, as the bimbo stripper-slash-crook, who gives her potentially one-dimensional character seriously personality while embracing all comedic opportunities. Unfortunately, the cast is comprised of young college kids, and while this hardly hinders their abilities, the characters in the story are not nearly that young. It’s like watching a performing high school do Guys and Dolls – the talent might be there, but the illusion is not. With no disrespect intended to anyone involved with He’s Not Himself, an age appropriate cast would simply serve the story better.

Silverberg and director Michael Pantone have done solid work with this musical, and it will be cool to see if it has the legs to take off from here. The score is nicely composed, occasionally derivative but always respectful to its roots. He’s Not Himself is at its best in Act II, when the farce really lets loose and the show becomes deliciously silly and bawdy –- Act I is much more conservative, cheesy and predictable. But given the festival setting and its inherent restraints (little set, little tech, little budget), He’s Not Himself has already accomplished something remarkable.

(He’s Not Himself plays at the Robert Moss Theatre, 440 Lafayette, 3rd Floor, as part of the 2011 Planet Connections Theatre Festivity. Remaining performances are June 11th at 2PM, June 12th at 4PM, and June 17th at 6PM. Tickets are $18 and are available at planetconnections.org.)