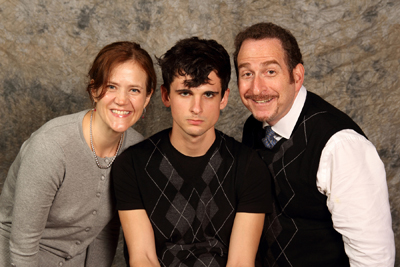 Nancy Stone, Tyler Lea and David M. Pincus are The Campbell Family in THE FAMILY ROOM. Photo by Coco Martin.

BOTTOM LINE: Therapy gets analyzed in Aron Eli Coleite's The Family Room, a new play about a family of therapists dealing with their own dysfunction.

A comedy with a dramatic core, The Family Room puts teenager David (Tyler Lea) under the microscope. His father, Dr. Campbell (David M. Pincus) and mother Dr. Tate-Campbell (Nancy Stone) are therapists, and they decide that David needs to start seeing a shrink himself. However, David would rather avoid the couch charade -- being a teenager sucks, and that's the brunt of his problems. David is also rightly discouraged by the idea of therapy because people see their shrinks forever and and no one ever seems to get well. His parents prove this theory.

The play takes us through various scenes between patient and therapist: we see David with the inexperienced but ambitious Dr. Goodwin (Coco Medvitz); we see Campbell with his therapist Dr. Durant (Jacqueline Sydney); and then in a role reversal we see Dr. Durant as the patient of Dr. Schwartz (Jonathan Tindle). Finally, we glimpse teenage Jennifer (Leah Barker), patient of Campbell and secret girlfriend of David. These short vignettes clip right along and the characters' exposition falls out of admissions and realizations within these encounters. Not surprisingly, everyone is dealing with stuff, from chronic illness to divorce to self-esteem issues, with some prescription drug abuse thrown in for good measure. Personal turmoil abounds.

Coleite is a Los Angeles guy with considerable television credits, and The Family Room evokes a small screen feel. It is still theatrical, thanks in part to Gwenyth Reitz's innovative direction, but there's something that keeps the work feeling hip and quick, rather than didactic and insular (as modern stage drama can sometimes be). This script is perfect for the stage, but with a few tweaks it could easily be adapted as a TV show or movie. The dialogue is contemporary and witty and the characters are relatable so it's easy to visualize a broad audience for the story.

The ensemble work in this show is consistently strong, with all actors finding quirky nuance that's sometimes charming and sometimes infuriating. It's a collaborative story with all of the vignettes coming together to tell David's tale, and each actor is well cast in his or her role. Lea, as David, and Barker, as Jennifer, give impressive performances as troubled teens. Both actors are fresh out of college and are making their New York debuts; both do a really excellent job.

Production values are high in The Family Room with a set of (dare I say therapeutic?) light green and blue tones. A comfy couch is the natural focal point of the room with a box of tissues close by. Designed by Jian Jung, it immediately informs the mood for what will be a recognizable trip down psychiatry lane.

The Family Room had a successful run in Los Angeles at The Powerhouse Theatre, prior to its arrival in New York. It is much deserving of this second production. Anyone who has personal exprience with therapy (be it as a patient, a doctor, or an observer of friends and relatives), will find much humor in the often hypocritical interactions between these characters. Whether it's a helpful tool for sanity or a total sham, therapy makes great fodder for an engaging story.

(The Family Room plays at ArcLight Theatre through October 23, 2011. Performances are Thursdays through Saturdays at 8PM and Sundays at 2PM. There is an additional performance on October 19th at 8PM. Tickets are $18 and can be purchased at brownpapertickets.com. For more show info visit thefamilyroomNYC.com.)