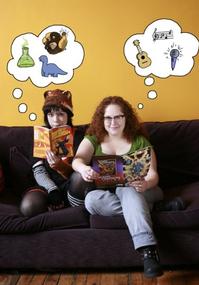 Five Things appears at The Brick this month as a part of the Comic Book Theater Festival. The play certainly does seem to be right out of the Sunday comics page with flavors of both Garfield and Cathy,  along with a generous dose of hipness and intelligence.

The vivacious main character of Five Things known simply as “The Girl” (Sarah Eliana Bisman), has found herself stuck in a rut. After moving to New York City following college she has spent the past five years in an administrative job and now at somewhere around the age of 30, she realizes she has failed to accomplish any of her dreams. She spends her time alone in her Bushwick apartment singing ukulele songs to herself, lacking close friendships and romantic interests. While sitting alone in a frou frou West Village bar after her friends fail to show up for her fifth anniversary as a New Yorker celebration, she meets a “fairy dragmother,” a statuesque man bearing a likeness to RuPaul (Cedric Jones). He insists that she spend her fifth year in New York City doing five things that scare her in order to improve her somewhat directionless existence. (A premise that has been seen most recently in a few memoirs.)

She spends the year trying to spread her wings, tackling such anxiety triggering-steps as wearing colors, playing open mic night, adopting a cat, going on bad internet dates and entering a song writing contest. Not all the steps she takes turn out well, her trio of internet dates turn out to be hilariously bad, including one scenario in which she encounters a woman posing as a man in order to do a sociological study on the honesty used in internet dating ads. Despite her many missteps along the way, she in the end becomes a stronger woman than she was before. She is supported on her adventures by her adopted cat Rhubarb (Jillian Tully, who also wrote the play) who bears the burden of possessing human intelligence due to lab experiments conducted on her. Rhubarb spends her time wishing The Girl could hear her articulate thoughts and building mechanical thumbs in her secret lair behind the stove.

Rhubarb, the cat with human intelligence, is charming and humorous; her human qualities make her seem more like a quirky, sarcastic roommate rather than a quick-witted feline. She functions as a sort of a female version of Garfield, only with a better level of energy and optimism as she sarcastically observes her owner in the throes of a new suitor. Tully evokes a feline like demeanor effectively, both in her movements and facial expressions.

As this play is part of The Brick Theater’s Comic Book Theater Festival, the play is comically stylized. This means that sounds and thoughts are cutely conveyed through the use of bubbles much the way they are on the pages of comic books. The thoughts of characters appear in image-filled bubbles above their heads and signs tell us when someone is at the door or when Rhubarb the cat scratches up the couch. An outing to the bar is communicated simply by the projection of a picture of a beer mug. Rhubarb’s science-heavy dreams are displayed by pictures that pop up in bubbles above her head. The Girl’s affection for her new boyfriend (Rob Brown) is displayed by a cut out pink heart that follows them around. The colorful, whimsical comic book style works well with the sweet, light-hearted storyline of Five Things.

One problem in terms of staging is the fact that the set’s couch blocks out a projection on the back of the stage which gives details regarding plot and setting, and later a comic strip that reflects the play’s ending. The images and text that are projected on the back of the stage are also projected for too short of a time for them to be completely read/seen. While the writing gives witty context to the story, the sight issues impede the production's potential. The play’s staging would otherwise be flawless.

Acting-wise, the cast is excellent. Playwright and actress Tully proves to have both a gift for writing as well as performing comedy. Bisman bursts with constant energy as the main character (and also proves to have a talent for singing). Mim Granahan also shows great adaptability, successfully tackling roles as the hippie neighbor, eastern European tourist, and bad-poetry-spouting waitress. Cedric Jones shines in his role’s required campiness, evoking laughter even from a simple eye roll or flick of a boa. Overall the play is a cute, colorful, charming treat that's bursting with energy.