This show has already closed, but for tickets for other shows in the Planet Connections Festival, go to planetconnections.org 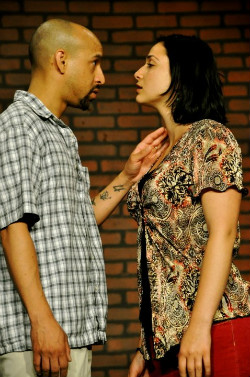 BOTTOM LINE: An uproariously funny black comedy that focuses on the unfathomably dysfunctional marriage of a psychotic couple.

Newlyweds and new couples beware: seeing the play Fidelity together may leave you raising questions about your relationship. Fidelity lampoons the ideas of marriage and sexual monogamy, showing how they bring out the worst in the play’s damaged characters. (Though one might note, despite his biting criticism of the institution of marriage, playwright Lenny Schwartz is both married and a father.)

Fidelity opens with married couple Tom (John Joseph Gomes) and Alison (Michelle Snyder) arguing over the fact that both of them sleep with other people. Alison then worsens things by revealing that she might be pregnant; although the baby cannot be Tom’s because he had a vasectomy, she argues that sometimes these operations have a way of “reversing themselves.”

Alison apologizes and tells Tom that if he kisses her all will be forgiven and they can sit down to her turkey dinner, acting like a normal married couple. He kisses Alison only to have her literally stab him in the back. We then are quickly taken back in time to see just how Alison and Tom arrived at such a dysfunctional, violent state.

The flashback begins with Alison offering up the Wikipedia definition of marriage and then expressing her dissatisfaction with it by suggesting that various violent acts be done to the person who wrote it. She says that the definition fails to convey the many “crazy people who inhabit this world and the length they will go to to feel wanted.” Alison’s obsession with torturing Tom and making him jealous certainly does seem to stem from a sick need to feel wanted.

After making the unwise decision to get married and eventually have children, Alison and Tom feel the love that once bloomed between them wither as they spend their only time together arguing and expressing their hatred for one another. They instead look to sexual affairs to find what they lack in their relationship with each other.

Tom tries to find the affection he lacks in his marriage through an affair with the bubbly, doe eyed Gillian (Gabby Sherba). Gillian keeps telling Tom how much she loves him, but he tells her that “Alison killed my ability to love.” Gillian soon reveals that she caught an STD from Tom, and “caught something else”—a pregnancy—from another man she sleeps with (one wishes this group of unhinged, damaged lovers would at least have the sense to use contraceptives). She hopes that Tom will start a new life with her and raise the baby as hers. Alison meanwhile is carrying on an affair with the immensely bland Ross (Jamie Dufault), who admits that his attraction to Alison stems from how deeply she repulses him. Meanwhile, Alison’s motivation for cheating is, by her own admission, to torture Tom. Alison explains to Ross that she enjoys torturing and abusing her husband by sleeping with other men because of the passion it unleashes, stating that she relishes the darkness he then reciprocates back to her. The anger and pain Tom shows is the way she can feel wanted.

Soon homicide becomes a possible way out for Tom and Alison. Gillian keeps dropping hints that she would kill Alison to finally have Tom to herself and Alison keeps trying to persuade Ross to kill Tom for her. Through direct address to the audience, Ross confesses that he has suffered all his life due to having such a bland name, and that no one ever would give a villain the name of Ross. By committing murder, he will finally change the self-image evoked by his boring name. As things unravel further, we soon learn that homicide only further fuels the fire between the sadly misguided couple.

Overall the cast, under Lenny Schwartz’s direction, milks every laugh possible from the many sarcastic one liners and quips running through Fidelity. Actress Gabby Sherba shines in particular, as she pulls off the overly sentimental lines of her character, lines that might seem implausible or over the top in lesser hands. In so doing, Sherba fully conveys her character’s naiveté and vulnerability. John Joseph Gomes also brings great energy to his role of the spurned husband driven to extremes he never anticipated.

While it may be a bit disturbing and dark for some audience members, Fidelity is also hilarious, lampooning both marriage and monogamy and offering a cartoonishly grim impression of both concepts. The play’s likability can be partly credited to its fast, action-filled pace; never once does the show lull or take a breath as its twisted story plays out. Every second is filled with dark humor or violence, making this work highly entertaining for those just cynical enough to laugh at its dark portrait of marriage and monogamy. Those nursing the wounds of recent breakups and failed relationships may find relief through this black comedy that paints monogamy as a direct path to hell.

(Fidelity played at The Gene Frankel Theatre, 24 Bond Street, as a part of the Planet Connections Festival. The last performance was Sunday June 12. For tickets for other shows go to planetconnections.org.)