Presented by the Shelter 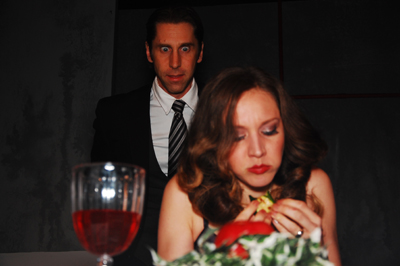 Michael Bernstein and Melinda Smart in "Dinner for the Queen," one of the plays in FAIRY TALE. Photo by Michael Kingsbaker.

BOTTOM LINE: This evening of original one-acts based on well-known children's stories isn't completely "happily ever after," but does find many laughs and some drama in its new takes on old tales.

Fairy Tale, devised and produced by young theatre collective The Shelter (now in its third season), turns to children’s stories from across Europe and America for its source material. Our culture’s attachment to these tales seems unshakable; from Disney to Broadway to art-house cinema to this year’s TV line-up, a rogue’s gallery of lost children, talking animals, and wicked witches keeps kids and adults alike coming back for more. The Shelter’s current production is definitely for the grownups, and brings old characters firmly into the present (and, in one case, even the future).

Comprised of five short plays, Fairy Tale is hit-and-miss in its mission to inject novelty into stories the audience will already know well. The most successful pieces are, ironically, those that deviate the most from the original tales and enter playful alternative worlds. Beth Jastroch’s 3 Sisters and a Carnie (whose title suggests a radical new interpretation of the Chekov play) takes the premise of The Three Billy Goats Gruff and relocates it to Oklahoma, where three trailer-trashy young women face off with a tattooed ticket-taker outside the fun house. Jokes about boobs, scary clowns, and arson abound, and the cast, especially Edwin Sean Patterson as the “gruff” carnie and Aubrey Ball as the smartest, most bad-ass sister, nails the over-the-top comedy. Jonathan Ashley’s Terror on Haxos 9, which turns Hansel and Gretel into a space exploration story reminiscent of Alien, also features strong performances (from Laine Bonstein as an earnest scientist and Nick Stevens as her goofy colleague). The costume and set design are quite well done, much better than one is used to seeing at such a modest venue; and, of all the pieces in the evening, Ashley’s seems to capture most fully the essence of the original story while transforming its plot and characters.

The other plays that make up Fairy Tale all have promising elements but fall short in one area or another. Dinner for the Queen focuses on Snow White’s wicked stepmother and her relationship with her too-honest mirror; it’s amusing but overstays its welcome. R.I.P. Captain Wendell, a 21st-century update of Washington Irving’s most famous story, is built on a touching premise but leaves us feeling detached. And Kate, based on perhaps the least well-known story of the bunch (Charles Perrault’s Donkeyskin), seems to miss the point entirely: fairy tales exist in order to explore, safely, frightening aspects of childhood and family life. Remove the magic element, and you’ve got to replace it with something else — broad comedy, melodrama, science fiction; otherwise, you’re just watching a standard kitchen-sink drama. Both of Kate’s actors, however — Rachel Cora and Michael Sean McGuinness — do good work.

The Shelter is to be applauded for the work it’s doing — developing new theatre and building creative relationships at a time when small theatre companies are dropping like flies. Its approach to making theatre is both practical and optimistic. If Fairy Tale doesn’t represent an artistic breakthrough, it is at least another solid step in a journey that one hopes will continue. May its next production find The Shelter coming out of the woods and into a “happily ever after.”

(Fairy Tale plays at the 45th Street Theatre, 354 West 45th Street between 8th and 9th Avenues, through December 11, 2011. Performances are Thursdays at 8PM, Fridays at 8PM, Saturdays at 3PM and 8PM and Sundays at 3PM. Tickets are $18 and are available at theshelternyc.org.)