The Devil's Music: The Life and Blues of Bessie Smith 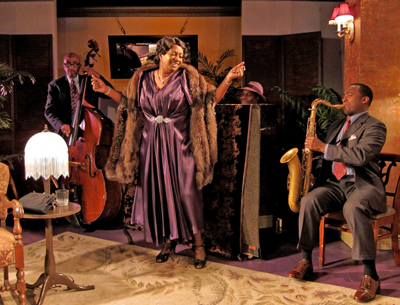 Miche Braden as Bessie Smith, with Jim Hankins on bass, Aaron Graves on piano, and Keith Loftis on saxophone.

Ninety years ago, Blues singer Bessie Smith [1894-1937] had it all. As the most successful African American musician of the 1920’s — she outsold such contemporaries as Louis Armstrong and Alberta Hunter — she had fame, fortune, and notoriety. Dubbed “The Empress of Blues,” she played clubs in big cities and small towns across the country.

Big, brash, and sassy, Smith didn’t suffer fools and she was as quick to criticize the black record labels that rejected her as she was to slam the white racists who saw her as their meal ticket. When bigoted club owners ordered Smith and her band to use the back door, she refused; when the Klan showed up at a North Carolina gig, she stood up and ordered them to leave her the hell alone. Later, after snagging a record deal with Columbia Records, she boasted about selling 780,000 records in 1923, but never stopped looking over her shoulder.

Humble she wasn’t. But she was fascinating, and her life story — rife with alcoholism, devastating losses, and soaring highs — makes The Devil’s Music: The Life and Blues of Bessie Smith a must-see production for anyone interested in U.S. race relations, women’s history, or the waxing and waning of popular culture.

The play opens on the evening of Smith’s funeral; piano player Pickle (the fantastic Aaron Graves) is clearly in mourning. At the same time, he and the band’s two sax players (the equally wonderful Keith Loftis and Anthony E. Nelson, Jr.) and bassist (the excellent Jim Hankin) can’t help but crow about the 7000 people who showed up to pay homage to their friend.

As they reminisce, the action flashes backward and in short order Smith (ably played by Miche Braden) takes center stage. What follows is an engaging, enlightening, and entertaining 90-minute musical that weaves a dozen songs (among them "St. Louis Blues," "Nobody Knows You When You’re Down and Out," and "I Ain’t Got Nobody") with anecdotes about the singer’s life. Braden, who played the same role off Broadway for a six week run in 2001, has a powerful voice that does justice to Smith’s powerful saga.

“You gotta live.  You gotta love. You gotta hurt,” she tells the audience. And she did.

An orphan by age nine, Smith and her six siblings were raised by their eldest sister in a one-room shack in Chattanooga, Tennessee. It wasn’t long before Bessie and a guitar-playing brother hit the streets to busk for change. Several years later, in 1912, Smith was hired to dance in a production starring Ma Rainey, but before long, she confides, “the Mother of Blues done stepped aside for our Empress.” No, she wasn’t humble, yet she did live and she did love — men as well as women — and it was this that led, at least in part, to her undoing.

At the height of her career Smith met, and subsequently married, a wannabe music manager named Jack Gee. The liaison soured quickly but the pair nonetheless adopted a child. When Smith learned that Gee had filched $3000 to launch his mistress’ career, the marriage exploded. In retaliation, Gee filed a complaint with The Society for the Prevention of Cruelty to Children. The charges: that Smith drank to excess, maintained late hours, and horror of horrors: “kept carnal company with women.” Barton’s rendition of "I Ain’t Got Nobody," sung immediately after she recounts this incident, is heartbreaking. “I ain’t no saint,” the singer concludes. “But what Jack did was a sin.”

Barton and the musicians who accompany her do a stellar job of introducing the hard-drinking and outspoken Smith to contemporary audiences. What’s more, as someone who could laugh at life without ignoring injustice, Smith’s example — despite her many personal demons — remains relevant. It’s a show worth seeing.