Off Off Broadway, New Play
Runs through 7.10.11
The Bushwick Starr, 207 Starr Street, Brooklyn 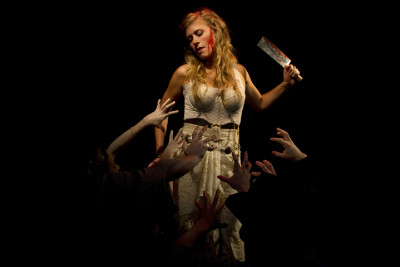 BOTTOM LINE: A play that blends the classic zombie and western genres into an entertaining and clever stage production.

Some people just can’t get enough of zombies. For whatever reason, the idea of bodies rising from the dead with the single intention of hunting down the living has become a cultural obsession that, like the zombies themselves, just doesn’t seem to ever die. If you are among the zombie-fanatics, you shouldn’t hesitate to hop on the L train and see AntiMatter Collective’s production of Death Valley, a “zombie western” that has hit the latest frontier of the New York theater scene, at the Bushwick Starr.

Death Valley, written and directed by Adam Scott Mazer and Dan Rogers respectively, originally appeared as a five-episode series for Bushwick’s Vampire Cowboys’ Saturday Night Saloon and now appears as a play in five (short) acts. True to it’s hybrid-genre, Death Valley draws on the classic zombie themes, while taking place in the dusty expanse of the Old American West.

The story begins when the clean-cut Christian cowboy Lawrence (Will Cespedes) encounters the dirty and delusional Wilbur (Patrick Harrison) in the middle of the desert. After an extended scuffle between the two men, Wilbur suddenly dies and (surprise!) rises again to try to kill Lawrence. Lawrence manages to escape to a nearby town where he reunites with Adele (Alexandra Panzer), a strong-willed prostitute who is tired of waiting for him to make good on his promise to sweep her away to California. Soon it becomes clear that Lawrence’s encounter with Wilbur was not an isolated incident and that a zombie plague is spreading through the desert. Wilbur sends Adele away with the other survivors, Doc (James Rutherford) and Genevieve (Jessie Hopkins), and promises to meet them in a nearby town where he thinks they can escape on the train. Along the way, they also meet up with Kaytennae (Casey Robinson), a Native American, who escaped before his tribe was completely wiped out by the zombie plague.

The zombie/western combination works well enough and the story holds a good mixture of funny, intense and sad moments. However, what really makes Death Valley special is that it is a zombie story told through theatre -- live, on stage, in front of an audience -- rather than through the usual mediums of television or film. In fact, the act of watching a zombie play gave me a new awareness of all of the elements that go into making a zombie story successful and that it takes a good deal of clever effects and choreography to pull it off on stage.

Playwright Mazer is also responsible for the fight choreography and, with the cooperation of the performers, has crafted a number of impressive fight scenes. The fighting is varied, employing shovels, clubs, knives, and a good deal of punching, kicking and body-tossing that is, on the whole, very well executed. This is only enhanced by an quieter but equally challenging choreography of fake blood capsules (the program credits Stephanie Cox-Williams with “Gore,” so I assume she’s responsible for this) and zombie makeup (by Alexandra Hellquist and Ashley Palmer).

When the punches aren’t flying and the blood isn’t flowing, Death Valley is more vulnerable to the common pitfalls of theater. The writing isn’t entirely consistent and, at times, the dialogue seems incongruous with the setting. Also, several of the characters (including Lawrence, who is a major character) suffer from being flat or unappealing. Thankfully, this is balanced out by some of the key performances. Panzer stands out as Adele, never breaking out of her strong-but-troubled mystique, that is epitomized by a scene in which she has to muster her strength to kill a friend out of mercy. Rutherford (as Doc) and Hopkins (as Genevieve) also give notably strong performances. Genevieve’s death scene, in which she shakes violently while blood dribbles down her chin, was (for me) the most engrossing moment in the entire show. The ensemble (Alexandra Hellquist, Kyle Page, Josh Payne, Bryce Henry, Caroline Bloom and Caitlin Johnson) also deliver fantastic performances as the horde of zombies.

The trek out to Bushwick is, typically, a rare and purposeful journey for those who don’t live in the neighborhood and many people will ask themselves if it is really worth the trek when there are so many more accessible theaters in more central locations. Judging from the age and style of the sold-out crowd (early 20s hipsters), I would venture to say that most people who saw Death Valley the night I attended live in or near the neighborhood (and it must be exciting for them to not have to travel into Manhattan for theater). Even so, with it’s barren streets and empty warehouses, I cannot think of a New York neighborhood with a more zombie-conducive atmosphere that Bushwick.

(Death Valley plays at the Bushwick Starr, 207 Starr Street in Brooklyn, through July 10, 2011. Performances are Thursdays and Fridays at 8PM; Wednesday, June 29 at 8PM; Saturday, July 9 at 8PM; and Sunday, July 10 at 2PM. Tickets are $15 and can be purchased by visiting brownpapertickets.com or by calling 800.838.3006. For more show information visit antimattercollective.org.)