Dally with the Devil 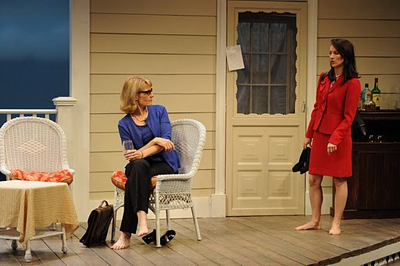 Elizabeth Norment and Elizabeth A. Davis in DALLY WITH THE DEVIL. Photo by Jon Kandel.

BOTTOM LINE: A political drama about three women who are invested in a senatorial election that, despite some strong performances and design, never quite lifts off.

Dally with the Devil is the story of three women involved in a political campaign. Charlotte (Erika Rolfsrud), who lives a remote life on Cape Cod and runs a political blog, is visited first by Irene (Elizabeth Norment) and then by Megan (Elizabeth A. Davis), who both drop her leads on stories intended to sabotage the opposing senatorial candidate. When Charlotte tricks Irene and Megan into a surprise meeting, however, the situation complicates as politics meld with the women’s personal lives.

Playwright Victor L. Cahn’s dialogue consists of a lot of hard-balling and political negotiation and, overall, proceeds with a sense of logic. These three women are smart, but come from very different backgrounds -- Charlotte is the journalist, Irene is the academic, Megan is the military intelligence. These are three modern archetypes of smart, assertive women and their respective careers inform the way they execute their research, their mud-slinging, and their negotiations with one another.

At the performance I attended, Rolfsrud, as Charlotte, came across as the least believable of the three women. Charlotte has an arsenal of punchy one-liners, but a lot of the humor was lost in deflated, under-emphasized delivery, that compromised the protagonist’s allure. Even her final moment, which should have been brimming with tension, felt timid. Norment (who was Kathleen Turner’s understudy in Broadway’s Spring 2011 ill-fated play High) and Davis are stronger as Irene and Megan, respectively, giving characters who are intentionally facaded (and therefore kind of flat) an assertiveness that is mostly fun to watch. Norment and Davis are also very well-cast as even their body types seem fitting for their characters. Overall, though, the performances suffer from an unnatural pacing of dialogue and long pauses between lines that, I suspect, was a faulty directorial decision. This kind of pacing that works well for David Lynch's strange, unworldy stories, but only sucks the life out of pieces that strive for realism.

The true stars of Dally with the Devil are in the design team. Jisun Kim’s set, which depicts the porch of Charlotte’s Cape Cod beach house, is realistic and detailed. The beige house amidst sand and grass, combined with the ever-so-subtle beach sounds that play throughout the show (by sound designer Nick Moore), create a serene atmosphere that gives an interesting contrast to scenes that would normally take place in an office in Manhattan or Washington. Michelle Eden Humphry’s costumes possess an equal level of thoughtful and nuanced design and do about as much to tell us about each character as the actors do. In the final scene, the costumes cleverly symbolize the characters’ political alliances (think presidential neckties) without seeming heavy-handed or overly distracting.

Though the play’s momentum never seems quite right and the characters are a bit lackluster, Dally with the Devil managed to hold my interest for the rather short 80 minutes it demands of the audience. Perhaps, with a little early-run tweaking and tightening, fans of political dramas will even find it riveting.

(Dally with the Devil plays at the Beckett Theatre on Theatre Row, 410 West 42nd Street between 9th and 10th Avenues, through October 8, 2011. Performances are Tuesdays at 7PM, Wednesdays through Fridays at 8PM, Saturdays at 2PM and 8PM, and Sundays at 8PM. Tickets are $55 and are available at telecharge.com or by calling 212.239.6200. For more information visit dallywiththedevil.com.)