Based on the novel by George Orwell; Adapted and Directed by Ryan Kiggell
Presented by aya theatre company 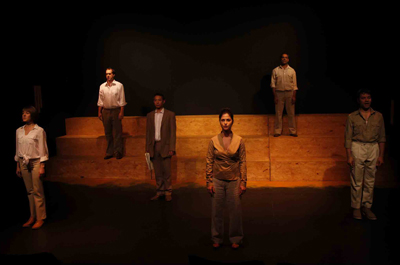 The cast of BURMESE DAYS. Photo by Carol Rosegg.

BOTTOM LINE: A gripping, disturbing period piece, based on a novel by one of the twentieth century's most important writers.

Before achieving literary immortality with the novels 1984 and Animal Farm, George Orwell traveled to Burma (today called Myanmar) in the 1920s and served on its military police force. His experience there inspired his first novel, an examination of the British Empire’s rancid colonialism. Called Burmese Days, the book follows the misadventures of John Flory, an Englishman who vacillates between contempt for the British imperial system and intense self-loathing for his own moral failures. Like Orwell’s more famous works, it depicts a society defined by cruelty and fear.

The stage adaptation of Burmese Days, being presented at 59E59 Theaters’ Brits Off Broadway Festival, is stark and unsettling. Six actors perform on an almost bare stage, dressed in modern clothing that “suggests” colonial-era tropical garb. The multiracial cast takes on an abundance of roles, with white actors playing both European and South Asian characters, and vice-versa. At first, one fears the continual swapping of identities will prove confusing, but to the cast’s (and director’s) credit, the complicated story remains clear. Even more significant is the effect of seeing Asian actors portraying Anglo characters, particularly when they are expressing the condescending or racist views common among the British in the east. The visual irony underscores one of the play’s core ideas: imperialism is internalized by everyone it touches, both the conquerors and the conquered.

The intelligent but troubled Flory (Jamie Zubairi) isn’t “officially” a part of the colonial apparatus; he’s employed by a private company, and admits freely that his reason for being in Burma is purely financial, not part of a project to “civilize” the natives. Flory maintains a friendship with a local doctor, Veraswami (Amerjit Deu), who has bought into the narrative of British superiority and yearns for the approval of his European overlords, all while maintaining a posture of native humility. These two men come the closest of any characters in the play to a connection based on fellow feeling rather than ambition or dependence, but even they can’t escape the tentacles of the imperialist octopus: Veraswami’s hopes of advancement hinge completely on his association with Flory, and Flory can flatter himself that he is “different” from other white men in Burma because of his relationship with Veraswami.

In a brilliant bit of casting, the actors who portray these nominal heroes also play the most obvious villains of the piece. Zubairi doubles as U Po Kyin, a cold, calculating native official who sets in motion a plot to sabotage Veraswami and advance himself. Deu plays Ellis, a hot-headed Brit who is so baldly racist even his fellow whites think he goes too far. (His regional accent—decidedly not posh—hints at the reason for his obsession with European superiority.) Flory is uncomfortable with his countrymen’s superior attitudes, but lacks the courage to stand up to them directly. Of course, he exploits the native population in his own way, keeping servants and an Asian mistress. His inner struggle intensifies when he meets Elizabeth (Charlotte Allam), his neighbors’ niece and the only single white woman in town.

The minimalist design of Burmese Days is enhanced by the creative use of props and sound, with an orange umbrella standing in for a tropical bird and the noises of the forest provided by actors with simple instruments. Such economy not only solves a practical problem for this small scale production, but also serves a thematic purpose: the colonial culture, despite its far-reaching and destructive consequences, is portrayed as something delicate, nuanced and, in the aftermath, ghostly. In the task of subjugating the Burmese, brute force is backed up by psychological pressures that may seem obvious to us in the present day, but remain unexamined by the characters on stage.

The cast is uniformly excellent, all having impressive stage and television credits in the U.K. In previews, however, they seemed under-rehearsed, sometimes stumbling over the dense text. Another weakness of the production is in the portrayal of Elizabeth, a character who may not be able to come alive on stage the way she would in Orwell’s novel, where her inner life can be more fully explained. Adapting prose into drama is always tricky, as the former “tells” a story while the latter is meant to “show” one. Burmese Days’ actors sometimes address the audience directly to fill in narrative gaps; some audience members will appreciate this, while others may consider it a form of dramatic “cheating.”

Burmese Days isn’t for theatergoers seeking spectacle or something light and breezy. It’s for audiences who want both substance and ingenuity, a show that explores history, human nature, and storytelling in an unfussy style on an uncluttered canvas. It excavates the highly specific in search of the universal, and leaves us, like John Flory, unsure of what part we play in the drama.