Off Off Broadway, Play Revival
Runs through 11.20.11
Access Theater, 380 Broadway 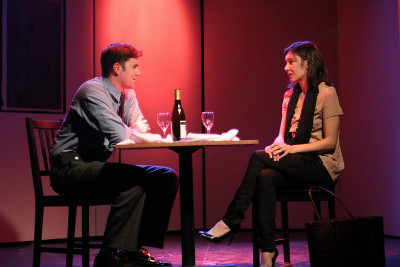 David Hudson and Kate Dulcich in BOY GETS GIRL. Photo by Gary Wong.

The sexual thriller plot of a would-be-suitor-turned-stalker is one that has been rendered many times on the silver screen. Rebecca Gilman’s Boy Gets Girl follows this standard story, however, unlike the Hollywood thrillers, Gilman takes the set-up and uses it as a platform to explore problems with gender roles and sexuality within a patriarchal society. While the unfolding drama is no doubt suspenseful and eerie, it also serves as a vehicle to lament on societal problems, creating a work that is both entertaining as well as thought-provoking and socially critical. Harry Diesel Productions revived this much lauded play, showing the issues in the script are just as relevant today as they were a decade ago when the play first premiered in New York City.

The play begins when Theresa (Kate Dulcich, who also co-produced the production) halfheartedly agrees to go on a brief blind date with Tony (David Hudson), a man who knows a friend of a friend. Over beers the two engage in stilted small talk, awkwardly covering such topics as occupations and what type of car they drove in high school. Theresa is a driven magazine journalist and Tony is a computer programmer. While Tony seems fairly innocuous, his feelings of insecurity and sensitivity emerge at the great embarrassment he expresses over not knowing who Edith Wharton is. He asks for a follow up dinner date shortly into their conversation, and the first red flag emerges as he eagerly attempts to plan a trip together to a Yankees game far off in the future, implying his intent on immediate coupledom. Theresa is careful to maintain boundaries however, refusing to give out her home phone number and shrugging off his hug in favor of a handshake. The next day at work Theresa is exposed further to his inordinate eagerness when Tony begins to call her office phone incessantly and sends a bouquet of flowers.

At the following dinner date Theresa calmly informs Tony that there will not be a third date. She explains that she simply works too much to commit herself fully to a relationship, but Tony doesn’t buy her excuse, asking her if this is all because he didn’t know who Edith Wharton was. His dejectedness soon is tinged with anger and Theresa flees.

Theresa assumes that she’s seen the last of him, but she’s not so lucky. His phone calls become constant and an endless succession of flower bouquets come to her office. Tony eventually sneaks his way up to her office, asking Theresa to lunch. Theresa assertively tells Tony to leave her alone and never contact her again, this leads Tony to fully exposing the anger he’s been hiding within. He unleashes a torrent of misogynistic rage, accusing Theresa as being, among other things, “sexually repressed.”

Theresa has a cold, detached nature, common with so many New York women who are used to distancing themselves from a precarious city life in which predators are around every corner. As Tony’s torment continues we see more and more cracks in her outer façade. The fact that Theresa seems so in control and detached makes the unfolding drama and suspense hit even harder. What does it say about our society if someone seemingly so strong and so in control could become so quickly unraveled all over a date gone awry? Her strength and drive is well conveyed in this production through her wardrobe of blazers and pants, giving her the air of a woman who has shrugged off any entrapments of submissive femininity.

As the play moves forward Theresa’s life becomes more and more unraveled by Tony and his increasingly violent threats. This scenario is juxtaposed against Theresa’s exploration of her relationship with three other male figures in her life, her kind hearted and fatherly boss Howard (Gregory Ryan), her well-intentioned coworker Mercer (William Peden), and a Russ Meyer-esque director (Robert W. Smith) she is forced to profile for a magazine, who seems to believe his life’s mission is documenting the beauty of women’s breasts. By witnessing the frightening behavior of Tony, Mercer gives his own wide-eyed insights into the gender disparity that exists in society when it comes to sexual behavior. He laments on a popular culture the glorifies male persistence in courtship and confesses his own sexual thoughts regarding Theresa, finding with Howard‘s guidance the boundary that separates guys like him from guys like Tony. Although Howard’s insights seem somewhat overly innocent and facile, they nonetheless serve to explore a culture that would cultivate a person like Tony. Theresa also laments on the play’s message further when she confers with the female detective assigned to her case, played by Madeleine Beck, although as New Yorkers, one would expect less subtle and more overtly horrifying experiences of sexual objectification and victimization.

Although the script’s insights may sometimes seem simplistic or overly naïve, the skill of the actors in this production serve to make the messages expressed more convincing. Dulcich authentically captures Theresa’s tough exterior as well as her frightened vulnerability. Hudson adds to the play’s momentum by giving a chilling portrayal of Tony. Talisa Friedman performs well in the roll of a ditzy assistant without venturing into over the top valley girl clichés. And sound designer Shaun Gunning, who also co-produced the play, establishes each scene well, filling the theater with such sounds as the authentic percussion of forks on plates or the announcements of a New York City subway.

Overall, Gilman excavates issues and societal problems that are portrayed on the stage far too rarely. The fact that the script even tackles these issues in a way that feels authentic and honest should be applauded.

(Boys Gets Girl plays at Access Theater, 380 Broadway at White Street, through November 20, 2011. Performances are Thursdays at 8PM, Fridays at 8PM, Saturdays at 8PM and Sundays at 7PM. Tickets are $18 and are available at boygetsgirltheplay.com or by calling 866.811.4111.)