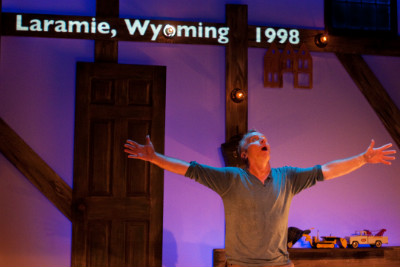 Bill Bowers in BEYOND WORDS. Photo by Yoshio Itagaki.

BOTTOM LINE: A solo show featuring a talented mime who spends a lot of time not miming.

In the first of the eleven scenes that make up Bill Bowers’ Beyond Words, he tells the audience about a poem that was pinned to his blanket when he came home from the hospital after his birth in 1959. That poem, titled “What is a Boy?” is the inspiration for Bowers’ latest original show, which is premiering at Urban Stages.

Bowers is a well-known mime, who has studied with Marcel Marceau and has toured the world with his previous shows Under the Montana Moon and It Goes Without Saying. Bowers is gay and from rural Montana, and both of these things seem to be integral to his sense of identity. We get to know a lot about Bowers, as about one third of the show stays “within words” and consists of autobiographical monologues. He tells us about his uncle who used to bully him, about his first job at a salad bar, about a week he spent in a small Montana town performing and getting to know the eclectic and surprisingly open-minded rural folks.

The rest of the show consists of an array of mimed scenes and dramatic monologues, all loosely connected to the question "What is a boy?" One mimed scene, titled “The Silver Dollar Saloon,” is a comical character sketch set in the old West. Another, titled “New Shoes,” is a cartoonish portrayal of an urban factory worker whose monotonous daily routine is broken when he buys a pair of ballet slippers. “Winesburg, Ohio 1919” is a monologue, based on Sherwood Anderson’s book of connected stories, about an affectionate teacher who is accused of molestation. “Laramie, Wyoming 1998” is an emotional mimed scene recounting the death of Matthew Shepard. Bowers strives for a sense of nostalgia for 20th century America through much of the show, integrating old radio sound clips and often seamlessly mouthing the words with exaggerated facial expressions and slow-motion body movements.

For the most part, I found Beyond Words to be too melodramatic and self-indulgent for my taste. Much of Bowers’ "miming" consists of a lot of spinning and twirling that, rather than conveying a human experience through wordless expression, felt to me like fluff and filler, as if he’s hoping we’ll be infected by the same significant feelings that make him want to move in that way. This is particularly apparent in the more emotional scenes, especially “Laramie Wyoming 1998,” where he spends much of his time with his arms raised in a Christ-like posture, spinning slowly, perhaps trying to liken the tragic death of Shepard to the crucifixion. But, then again, perhaps not. Maybe Bowers feels uncomfortable actually recounting that horrific event through mime and this is his way of saying it is important. It really is hard to tell. The scene suffers from abstraction and, paired with the song “Sounds” by Suzzy Roche, it is also a bit overblown. Many of the scenes are accompanied by loud, lyric-heavy acoustic guitar music that threatens to overpower what is happening on stage and is, to be perfectly frank, really cheesy.

Bowers is a talented mime, but this show doesn’t really focus on showcasing that. “Silver Dollar Saloon” and “New Shoes” are two of the more classic mimed scenes and they exemplify how Bowers is able to amuse an audience and tell a complete story without saying a word. By comparison, his autobiographical stories and abstract body movements were disappointing. If I had my way, Bowers would focus on this unique skill and spend more time taking us “Beyond Words.”

Overall, Beyond Words also lacks cohesion, never really saying much about what Bowers initially presents as a sort of thesis. I learned a lot about Bowers' life history, but I didn’t come away with a fresh answer to the question “what is a boy?” Instead, I left with the same notion that I came with: that boys can be a lot of different ways. Perhaps that is the message that Bowers intended but I hoped for a more eye-opening experience. In 2011 New York City, this notion isn’t exactly groundbreaking. The other question that Bowers poses, “What makes a boy a man?” seems to be lost in the body-twirling of his final number, set to music by Lori McKenna, in which he re-hatches sound clips and gestures from all the previous scenes, all while holding an imaginary baby and chanting "this is love."

(Beyond Words plays at Urban Stages, 259 West 30th Street, through October 30, 2011. Performances are Mondays at 8PM, Thursdays through Saturdays at 8PM, and Sundays at 5PM, with additional performances on Tuesday, October 11 and Wednesday October 12 at 8PM. Tickets are $40 ($15 or two for $25 for Monday performances) and are available at smarttix.com or by calling 212.868.4444. Additional show information at bill-bowers.com.)