$35 and are available at ticketcentral.com 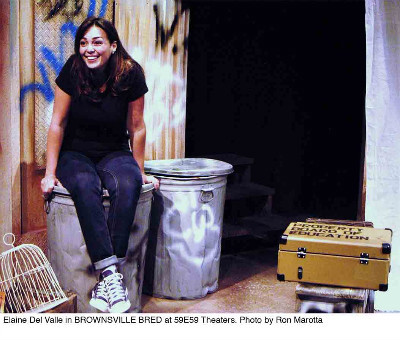 BOTTOM LINE: An immensely humorous and inspiring solo show that examines one woman’s adolescence in Brownsville, Brooklyn in the 1980s.

A childhood spent in public housing projects alongside crack addicts and criminals, getting robbed at gun point, and living in constant danger, might not seem the likeliest of comedic material, but performer and playwright Elaine Del Valle uses humor as a survival strategy, finding much of it in her far-from-ideal upbringing in Brownsville, Brooklyn in the 1980’s.

Del Valle’s one-woman show bears somewhat of a resemblance to fellow Puerto Rican John Leguizamo, who explored his unstable childhood in Queens in both Sexaholix: A Love Story and the recent Ghetto Klown. Del Valle’s tale however, despite dealing with heavy-hitting events, is more glossed over than Leguizamo's work; she avoids topics such as sexuality.

The piece opens with a video projection providing a background on the grim world that is the Langston Hughes Projects in Brownsville. We are shown statistics on the poverty of the area and taken inside the project’s hallway. When the sheets serving a screen come down we see Del Valle cutely sitting on top of a trash can. With her wide smile, swinging Converse hightop clad feet, and high voice she easily evokes a girl on the verge of adolescence. Del Valle follows with a series of vignettes that show her from the onset of puberty through her senior year of high school, offering a girl trying to etch together happiness even in her difficult circumstances. Some of the stories are purely sweet and humorous, such as her mother eagerly calling up all her friends with the news that Del Valle has just gotten her period and is now officially a “señorita.” Soon enough, Del Valle shows us the humor in her dangerous surroundings, comparing the crack vials that litter the ground to bullet sizes, and detailing her strategies for surviving while walking down the street in Brownsville (crossing the street halfway down each block or pretending to see a friend across the street.)

Despite the bleakness of life in the projects, Del Valle for the most part keeps all of the material light-hearted and comedic, turning such subjects as her building's multiple “crack heads” or her mother being robbed at gun point in their building elevator as sources of laughter. The play takes a turn into serious territory when Del Valle recounts a tale of a man attempting to force her into a secluded area to rape her. Del Valle, however, finds that she possesses greater physical strength than she thought and successfully fights off her attacker. (During the performance I attended, the relief and joy experienced by the audience at this point lead to resounding applause.) Del Valle is quick to let go of the somber tone and turn once again to humor, boisterously lamenting, “Don’t mess with the Langston Hughes Posse.”

Elaine Del Valle remains an unstoppable force of energy, leaping and dancing across the stage with brown doe eyes and a child’s voice. She never loses momentum at any point during the show, with every story remaining fully riveting, due in part to her enigmatic spirit. Del Valle has performed the work previously for two years on smaller stages, developing it at the Nuyorican Poetry Café and performing upstate at the Schoolhouse Theater. Her comfort with the script is obvious as she seamlessly skips from one story to another and from one age to the next. Director Pamela Moller Kareman guides the staging well with Del Valle making full use of the space by using such creative strategies as turning the couch into the edge of a swimming pool.

Throughout the work Del Valle's childhood naiveté never seems to be lifted, with her seeming just as innocent at seventeen as she is at the play’s beginning. Del Valle’s sexual awareness remains limited to a long distance crush on a high school football player named Skippy. Her seemingly perpetual innocence, however, is an endearing juxtaposition to the ugliness she faces on a daily basis in the projects.

Del Valle's performance is also nicely augmented with music and sound effects that serve to set the 1980s tone (i.e. Run DMC) as well as incorporate her father’s voice or the urban street noise. She also shows her rap skills, adorably rapping at multiple moments, including a humorous audition for New York’s High School of the Performing Arts. The volume at the beginning of the performance I saw began a bit too loudly and occasionally drowned out Del Valle’s voice, while the background noise began a bit too softly and was hard to differentiate from murmuring audience members. Hopefully the level issue has been worked out by now.

Overall, Brownsville Bred is an inspiring comedic tale, showing that through perseverance and optimism one can overcome an early life marred by challenges and disadvantages. Del Valle’s story is an inspiring and powerful one.