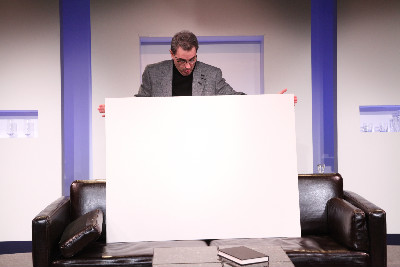 BOTTOM LINE: The Phoenix Theatre Ensemble breathes fresh life into this much lauded work which focuses on how a questionable painting leads to unearthing tensions in a longstanding friendship.

The question of what one perceives as valid art is the conflict at the heart of Yasmina Reza’s play Art. The play, which originally debuted in Reza’s home country of France and played on Broadway in 1998, is now being revived by the Phoenix Theatre Ensemble. Although it's been nearly 13 years since the play first came to New York, its material still feels fresh and timely, especially in an era where the most famous artists of recent years have found a name through celebrity ties and pulling attention gaining stunts, rather than by traditional talent.

The play opens with Marc (Brian A. Costello) informing the audience that his friend Serge (Joe Menino) has recently spent 200,000 francs (although the actors speak in English with American accents the play retains its French references) on a questionable painting consisting of white diagonal lines on a white canvas. It is clear from Marc’s tone of voice that he thinks little of Serge’s taste in art and considers the purchase to be quite laughable. When Serge presents the painting to Marc he collapses in laughter and bluntly informs Serge that the painting is in fact, “total shit.” Apparently, the painting was done by a well known artist named Antrios who has become trendy in the art world. For Serge, purchasing this painting means gaining admission into a more cosmopolitan world. Marc makes it apparent that Serge’s praise of a painting he finds so laughable makes him uneasy. His laughter soon turns to anger and he begins to take multiple homeopathic pills to ease his anger. “I love Serge,” says Marc. “And I can’t love the Serge who’s capable of loving that painting.”

Later we are taken to their friend Yvan’s (Jason O'Connell) apartment. The change in setting is simply established by the painting that dominates the background of the set changing into a more traditional work: a scene of sailboats on water. (In Marc's apartment the painting becomes a landscape view from a window, showing us he prefers more classical forms of visual art.) In a monologue (playwright Reza establishes character and inner motivations at many times in the play through monologues, a strategy that works well as these men are not entirely honest with one another), Yvan informs the audience that he has embarked on two major life changes: he has started a new job selling stationery wholesale and has an impending marriage to a “pretty girl from a good family.” Yvan does not feel excited about either change but feels that they are things he might as well do. One gets the feeling that Yvan is a deeply unhappy man and yet he has no idea as to what might make him happy, he has just become completely apathetic with life and switched on auto pilot. This is later confirmed when Marc asks Yvan if Serge’s painting makes him unhappy and he tells the audience that he never really feels happy. Marc tells Yvan that Serge’s pride for the painting makes him deeply upset. When Yvan views the painting he admits that he neither hates it nor likes it.

Later when the trio meet up for dinner and a movie the issue of the painting leads to an explosive fight. Soon however, it is revealed that the painting itself is not the sole reason of the argument. Rather it is the fact that the issues brought up in the painting expose the tensions in the friendships that have long been hidden. Marc reveals that Serge has long upheld him as superior in his taste and knowledge of art and culture. The fact that Serge bought such a terrible painting on his own without consulting him shows that Serge’s relationship with him has changed. Serge has confirmed during the course of the evening his belief that he is superior in cultural taste to the duo by insisting that Marc read a book by Seneca as it is a “masterpiece.” No longer does Marc feel Serge looking up to him, rather Serge, who Mark has long deemed inferior, sees himself as the well-cultured one.

Yvan’s half-hearted venture into marriage proves as well that he has become dull, and is willingly abandoning any edginess he may have once possessed in his younger years. As the drama unfolds further so do the tensions the trio have been holding back all these years.

Despite clocking in at an hour and 40 minutes (perhaps longer on Broadway when an intermission was included) the play feels much shorter, perhaps due to the simplicity of the the subject matter. Reza cleverly takes a simple idea and makes it more complex, using a painting as a means to explore tensions in the dynamics and friendship and life direction.

The costuming for the characters differs from past productions, futher illuminating the characters' differing self perceptions and personalities. Marc's clothing, in particular, is more bohemian than the ensembles worn in earlier productions, thanks to the costume designing of Sam Fleming. With a ponytail, eyeglasses, jeans, and a tan suit coat, Marc looks like a left-leaning English professor, making his self perception as a culture connoisseur more apparent in comparison to the more conservatively dressed characters. Yvan’s boyish preppieness also serves to show his lack of direction in life. The simplicity of the play is also further emphasized by a general lack of music, of which there is none until the end. Brian A. Costello also conveys Marc’s short temper and dissatisfaction well, imbuing every line with fervor. Jason O’Connell captures Yvan’s bumbling frustrations well, making them a frequent source of humor. Overall, The Phoenix Theatre Ensemble proves that Art is as relevant a work today as it was in the 1990’s.

(Art plays at The Wild Project 195 East 3rd Street, through December 18, 2011. Performances are Tuesdays through Saturdays at 8PM and Sundays at 3PM. Tickets are $25 and are available at PhoenixTheatreEnsemble.org or by calling 212-352-3101.)