Written and Performed by Daniel Arnold and Medina Hahn; Directed by Ron Jenkins 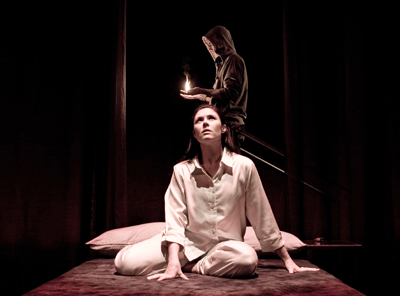 Daniel Arnold and Medina Hahn in Any Night.

Starry Night Entertainment, in association with New York City’s The Bridge Theater Company, presents the latest from Daniel Arnold and Medina Hahn, the duo behind acclaimed Vancouver-based creative team Dualminds. Their show Any Night is a phantasmagoric thriller about old problems unfolding in new ways. Anna (Hahn) is a dancer with a sleepwalking history who moves into a basement apartment beneath Patrick, an oddly charming tech geek (Arnold).

The play that unfolds would be a close-shot, multi-location production were it on film. The stage demands, instead, innovative and ambitious use of theatrical devices to tell the story, and it is these which distinguish the performance from mediocrity. Director Rob Jenkins and his design team (David Fraser on lights, Gord Heal on sound, Peter Pokornky on set and props, Erin Macklem on costumes) accomplish much with little in an economy that is stunning and artful. Transitions in lighting (from trembling disparate blue to stark and narrow white) and punctuations of sound (shattering glass, alarms, sighs) help to guide us through the nonlinear plot and recognize the deviations from objective reality. A brilliantly utilized half staircase on wheels stands in for what would otherwise need be a much more extensive and expensive set. With just a change in placement and corresponding blocking adjustment, Jenkins shows us upstairs, downstairs, outside, down the street, on a mountain, at a bar and inside a dream. What the design offers, then, is more a framework for the canvasses of our own imaginations than a detailed reconstruction of someone else’s. And isn’t that the magic of theater?

The actors’ performances are equally virtuosic. Both pair intense character study (Hahn’s Anna carries the audience through her own disjointed paranoia while Arnold’s Patrick circles through it with sinister charm) with technically masterful movement. Under the tutelage of movement coach Laura Krewski, each travels through the space with such precision. No gesture is unintentional. Patrick is made all of right angles and Anna of subterranean frenzy. And never does the energy subside.

Without giving away the ending, I will say that the play, like countless news stories published everyday, warns us about potential dangers of the digital age. However, by anchoring these dangers in a particular relationship, Any Night shows us that our real fears do not revolve around gadgets but rather questions of trust, security, privacy, and a shared reality -- in other words, universal abstractions that have concerned man since the dawn of civilization but whose definitions modern life has made less firm.

In both its production and its themes, then, I see Any Night, to be deeply concerned with human connectedness. And it is for this reason that the announcement that it is to be made into a film gives me mixed feelings. Cross-genre adaptation often produces interesting results, but it seems to me the message of the play may be lost. In one scene, Patrick shows Anna how a motion capture device could digitally reproduce her dance exactly, to which she responds “where’s the magic in that?” Agreed, Anna. Agreed. So see Any Night while it’s live onstage!