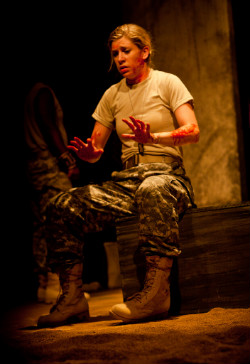 BOTTOM LINE: A thought-provoking social statement about war and injustice, with compelling acting and an accomplished technical production.

Plato once said “only the dead have seen the end of war,” expressing with prophetic accuracy his belief that war would always be a constant in the history of human kind. And it’s precisely the topic of war and its timelessness that takes center stage in the Flux Theatre Ensemble’s latest production, Ajax in Iraq, a play that uses Sopocles’ greek tragedy Ajax as a classical backdrop against which playwright Ellen McLaughlin narrates the struggles and fears of a group of American soldiers immersed in the war in Iraq. It only seems fit then that Athena, the immortal Greek goddess of war (played by Raushanah Simmons), should be our narrator in this story to remind us with sarcasm and mirth of how our fallen human nature can make us capable of both heroic acts and unspeakable cruelty, with often only a thin line separating the two.

The story mainly focuses on a small battalion of American soldiers fighting in Iraq and struggling to reconcile the daily stress and fear they are suffering with the abstract notions of patriotism, freedom and democracy for which they are told to fight this war. Within this context, A.J. (Christina Shipp), a courageous female soldier, undergoes not only the hardships of war but also the sexual abuse of her commanding officer and the inevitable lure of suicide. Interwoven with this main narrative is Sophocles' account of Ajax, the best soldier amongst the Greeks who is unjustly denied an award in favor of his peer Odysseus. Maddened by this injustice, he proceeds to torture his aggressors only to realize in his insanity that he has slaughtered a herd of animals instead. Ashamed, he contemplates ending his own life in spite of the petitions of his wife and friends. As the stories both reach their climax, they become increasingly intertwined on stage.

Ajax in Iraq masterfully combines a strong social statement with the story of a personal tragedy. There is a complexity to the script that is discerned in the multitude of themes and layers which the play presents, some of which are only touched upon sweepingly. What does it mean to have thousands of our troops in places like Iraq and Afghanistan fighting a war for reasons we constantly need to be reminded about? What is it like for a soldier to fight a war against a hidden enemy in an unknown and seemingly treacherous country? What will be the plight of these troops, as they fail to integrate back into an alienating society, while struggling with the lasting effects of war? These themes are presented to the audience in a remarkably effective manner due to the convincing acting and the great technical production, which successfully immerse the audience into the lives of these soldiers and force us to ponder their plight. But much to the credit of McLaughlin the play also knows how to transition from these greater themes into the more personal tragedy of A.J., who must struggle with injustice and betrayal, much as her fictional counterpart Ajax had to.

The show is directed by August Schulenburg, who opts for a dynamic and high-tempo representation of the narrative. The actors often bombard us with ideas and perspectives on war emerging from all corners of the stage. There are also interesting elements of abstraction such as when the actors form a loud group warrior dance representing A.J.’s transition into anger and madness. These elements do a great job of creating the tension required to stage the main themes in a convincing and engaging manner.

The Flux Theatre Ensemble’s season this year is entitled “Don’t Look Away” and this play does complete justice to the season’s topic. By reminding us of the tragedy of war, both at the social and personal level, the play manages to prod us out of our comfort zone. However, while the resource of combining a classical narrative with the contemporary characters did provide a sense of timelessness to the topics of war and suicide, I did feel at times, especially as both stories started to converge, that the intertwining was a little over-exploited. Perhaps a more implicit way of drawing parallels between the stories could have encouraged more depth to the story of A.J.

Ajax in Iraq does an excellent job of presenting a social critique against war combined with the story of its effects on the individual lives of a group of soldiers. If you want to see a play that will have you thinking about its story for many days to come, this will definitely stir your conscience.

(Ajax in Iraq, presented by Flux Theatre Ensemble plays through June 25, 2011 at the Flamboyan Theater at the Clemente Soto Velez Cultural & Educational Center,107 Suffolk Street at Rivington. Performances are Thursdays through Saturdays at 8PM and Sundays at 3PM with an additional performance on Wednesday, June 22 at 8pm. Tickets ($18/$15 students) may be purchased online at www.fluxtheatre.org or by calling 866.811.4111.)