Rush tickets are available at the box office for $26.50.

Written and performed by John Leguizamo; Directed by Fisher Stevens 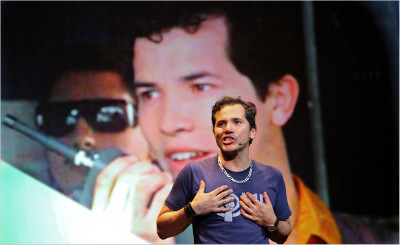 BOTTOM LINE: A master of the one-man show returns to Broadway to rock the house with his tales of art, life, and showbiz.

While I’ve actually liked a lot of the one-man shows that I’ve seen, somehow the proposition of seeing one single person take the stage and dare to entertain an entire crowd hits me with trepidation every time. The stakes are high, and with the wrong performer, it can make for a long evening. But John Leguizamo is a one-man show veteran, who has earned his stripes and his place on the Broadway stage. He is also one of the most talented and compelling actors I can think of. While Spawn was not a very good film, I was completely enthralled by his performance as the Clown. But along with his numerous film performances, he is also known for his previous one-man shows Mambo Mouth, Spic-O-Rama, Freak, and Sexaholix…a Love Story (the last two were on Broadway).

Ghetto Klown sets out to tell the story of where these one-man shows came from. And from the beginning, Leguizamo warns you that this is a cautionary tale of what not to do. It all begins in his childhood, with his family’s migration to Queens. Leguizamo explains his early passion for performing and how he was pointed down the path of theater. But this is not Inside The Actors Studio. Ghetto Klown is filled with dancing, blasting music, other characters, and humor that will have you laughing from deep in your belly.

Leguizamo takes the audience along on his journey into television, film, stupid decisions, love, loss, and everything in between using a vast array of his many talents to do so. And although much of the show sets the audience laughing, there are moments when a truthful moment leads to a cutting silence. It is beautiful in a lot ways. Reliving the show as I write, I am reminded of my own life and the truths that come with it. For me, that’s what I want a great piece of theater to do--connect with me on a human, emotional level.

Compared to Mambo Mouth and Freak, Leguizamo plays himself for the majority of the show. When he plays other characters, he does so through his physicality or the use of a simple prop. It’s a joy to watch him play the different characters who come in and out of his life along the way. All of them are used effectively and are still running through my mind.

A lot of what he reveals is a side of showbiz with which general audiences might not be familiar. Leguizamo performs stories about his working experience on well-known television and film projects that featured fairly famous celebrities. We learn how Leguizamo got into fights with many of these stars, usually while he was under the influence. Nonetheless, the dirt he reveals is funny, and certainly juicier than most things you’d find on an entertainment news show.

Ghetto Klown is also technically fantastic. It features a large projection screen, dressed like a Queens billboard, that projects slides, animations, and videos throughout the show. The media is timed precisely, never missing a beat, and it allows for some very memorable visuals. I’ll never look at the NYC Subway map in the same way again! The sound cues and lighting are also top notch. Everything works in harmony and accents Leguizamo’s timing perfectly. It isn’t over the top in any way, but definitely gives the audience a truly Broadway-caliber production.

At the end of the show, the writing and direction do a very nice job of completing the journey. While I won’t say what happens, I appreciated the choices that Leguizamo and director Fisher Stevens make. It’s truly a piece of art. And that’s what John Leguizamo does-- he makes art. And it is damn fine to watch him do it live.

From the moment the lights went down, until the final blackout, I was hooked. At the end, all I could do was scream and be a part of the standing ovation. Leguizamo is amazingly talented, and the theater is one place where you can see him let it rip. In many ways, Ghetto Klown can be viewed as a celebration of how good theater can be, and how well it can be done with a solo performer. In fact any artist, and especially actors, will love this show. As will those who would never dream of stepping on a stage. I highly recommend Ghetto Klown: you’ll get your money’s worth, and you’ll be glad you got the chance to see a true artist in the flesh.

(Ghetto Klown plays at the Lyceum Theatre, 149 West 45th Street between 6th and 7th Avenues, through July 10th, 2011. Performances are Monday, Tuesday and Thursday at 7 PM, Friday and Saturday at 8 PM and Sunday at 3 PM. After May 23rd, performances are Monday and Tuesday at 7 PM, and Wednesday through Saturday at 8 PM. Tickets are $29.50-$116.50 and are available at telecharge.com or by calling 212.239.6200. Rush tickets are available at the box office for $26.50. For more information visit ghettoklownonbroadway.com.