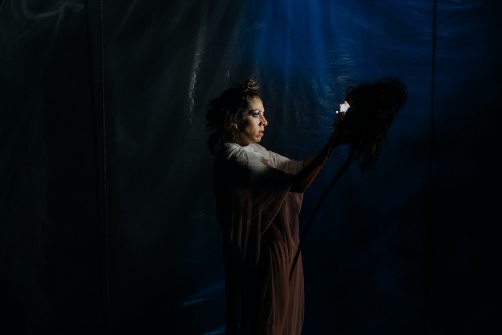 BOTTOM LINE: A bold interpretation of one of Oscar Wilde's stranger and more provocative plays.

Best known for biting comedies like The Importance of Being Earnest, Irish writer Oscar Wilde began his dramatic career with more serious fare. His Biblical drama Salome predates his more famous stage works but wasn't performed until after his heyday—specifically, after he had been tried and convicted of "gross indecency" for his affair with a man. A tragedy about the destructive power of desire, the play mirrors the playwright's personal downfall all too well.

Working from his own new English translation (Wilde's original text is in French), director James Rutherford stages a Salome that's a feast for the eyes, with costumes and scenery—provided by Lara de Brujin and Oona Curley, respectively—that merge the historical with the ultramodern. The soldiers and courtiers of ancient Judea are draped in sumptuous fabrics and glittering jewels, but they're also surrounded by seductive and unnerving projections, designed by Wladimiro A. Woyno R. Seduction, of course, is the matter at hand, as Princess Salome (Laura Butler Rivera) falls suddenly and passionately in love with pious Iokanaan (Feathers Wise), a.k.a. John the Baptist, who is being held prisoner by Salome's stepfather Herod (Marty Keiser). The debauched potentate is himself in the throes of an indecent attraction to his sexy stepdaughter (also his niece...it's complicated) and offers to do anything—anything—to convince her to dance for him and his party guests. And dance she does, in an erotic, almost hallucinatory sequence choreographed by Jess Goldschmidt.

There's plenty of dread and bloodshed in this grim tale, but Wilde being Wilde, there are also moments of levity and absurdity, including some nervous guards' attempt to hide a body and an argument amongst Jewish elders about the prophet Elijah; the large and talented cast handles both the comedic and dramatic scenes with aplomb. Ultimately, however, Salome is a tense journey back into history and legend that is nevertheless forever relevant, reminding us that unchecked desire can lead to ruin, even for the most powerful among us.

(Salome plays at the Irondale Center, 85 South Oxford Street, through October 27, 2018. The running time is  95 minutes, no intermission. Performances are Mondays, Wednesdays, Thursdays, Fridays, and Saturdays at 8. Tickets are $15 (plus $3.48 ticketing fee) and are ONLY available online at fringenyc.org.)