You Belong With Me Because
You're So Vain 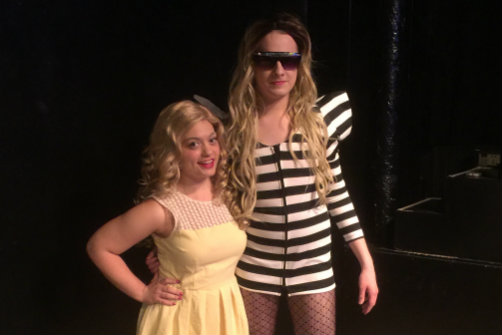 Sonya Higgins and Ty Baumann in You Belong With Me Because You're So Vain. Photo by Heider Tunarrosa.

BOTTOM LINE: A short gay rom-com with a promising concept that falls slightly short on delivery.

C.C. Baxter (Heider Tunarrosa) is an uninspired Colombian songwriter who is painlessly pining over the idealized version of his terrible ex-boyfriend who haunts his subconscious along with imaginary versions of Lady Gaga (Ty Baumann) and Taylor Swift (Sonya Higgins). With his imaginary friends in tow, he must decided if his new-found fling Samuel (Tristan Biber) is worth ruining his friendship with his best friend and roommate. Is this the love of his life or just another bad romance? These are the questions that are posed in this gay romantic comedy about a struggling songwriter desperately looking for love and inspiration for his next big hit.

While the premise might sound like something fresh and exciting, You Belong with Me Because You're So Vain comes across as a generic romantic comedy about a hopeless romantic looking for love in all the wrong places. Tunarrosa does double duty as both the playwright and the lead actor of this short piece.  Tunarrossa manages to write some solid one-liners and quips for the other characters in his story, but fails to deliver the material with the same gusto as the rest of his cast mates. It's tough work carrying an entire show, and the material might have been better served with someone with a bit more confidence on stage.  While Tunarrossa puts up a fine effort, it might have been nice to see someone tackle the material who is not so emotionally invested in it.

The best part of You Belong With Me Because You're So Vain is by far the leading ladies.  Sonya Higgins embodies Taylor Swift with a wide-eyed sense of bubble gum romanticism and a plucky "can do" attitude on life and love that Swifty herself would give an enthusiastic two guitar picks up. On the other side of the spectrum is Ty Baumann as Lady Gaga. He rocks a sequined leotard, torn fishnets, and spiked heels all while maintaining sexy rock-and-roll vibe and delivering sassy one-liners that easily could have become one-note but are by far the standout of the entire production. Even if you're not a Lady Gaga fan, you will be hard-pressed not to crack up at Baumann's unexpected and well-placed hair flips, hand motions, hip pops, and bitchy takedowns. Tristan Biber is also quite good as Samuel, the object of everyone's affection. He takes a fairly unlikable character and transforms him into a flawed and surprisingly romantic guy that you strangely end up rooting for.

FringeNYC is a great place to showcase new work as it's being developed. It will be interesting to see what the future holds in store for You Belong With Me Because You're So Vain, a promising new work that probably just needs a bit more work to realize its complete quirky, romantic potential. The cast has some clear standouts and, with some tweaking, there could definitely be a future life for this show. If you're a fan of Taylor Swift, Lady Gaga, or sappy romantic comedies, you will probably find something to like about You Belong With Me Because You're So Vain.

You Belong With Me Because You're So Vain is by Heider Tunarrosa. Directed by Matt ZanFagna.