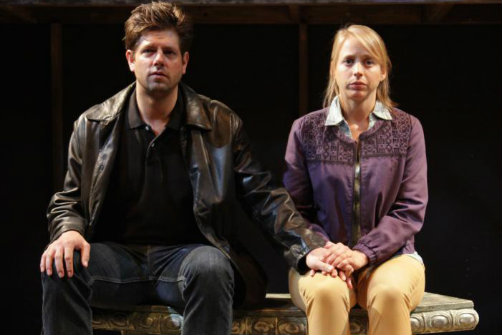 Dustin Charles and Jody Flader in The Gorges Motel. Photo by Britannie Bond.

BOTTOM LINE: The Gorges Motel is a series of romantic comedies and relationship dramas from the perspectives of guests and staff in and around a Watkins Glen motel.

Gorges Motel is a great Fringe show to see for some lighthearted fare. The piece is actually a series of nine short plays from the different perspectives of the guests and workers at a Watkins Glen motel. Antics ensue when several members of a wedding party fear disaster at the couple’s nuptials. Meanwhile, guests in adjacent rooms grapple with their own relationship dramas from the bleak outlook of a run-down upstate motel. Though at times sophomoric and bordering on stereotypical, Gorges Motel is chock-full of surprises and jokes ready for a sit-com pilot. Certain segments grappling with grief, doubt, loss, and other heavier topics keep the evening grounded, but in the end, Victoria the motel owner facilitates a cathartic closing against the backdrop of a nighttime laser show.

In the cast, Amanda Sykes offers particularly strong performances throughout; her portrayal of an abandoned daughter-in-law in "Second Chance" is absolutely heartbreaking. Jody Flader and Dustin Charles should also be noted for their skilled naturalism in both comedic and dramatic roles. Some of the double-casting choices become confusing at the end of the play; during the wedding itself, it is uncertain by the staging and design if we previously met the bride’s attendants earlier in the evening. The casting lists in the program, however, clarify that only Cynthia Mace portrays a single character throughout the performance: the aloof motel owner Victoria, a role that seems perfect for this comedic actress.

It is also worth pointing out that Gorges Motel as an event is an artistic feat within itself. For the past year this collective of six playwrights—Gretchen Cryer, Lynne Halliday, Isaac Himmelman, Hames Hindman, Arlene Hutton, and Craig Pospisil—have been workshopping this concept of weaving nine short plays set in and around a motel together in one narrative. In some way, each of the nine scenes tells us something new about the wedding party in town for the week. While some of the stories were more fully integrated into the central throughline than others, it is quite entertaining to experience a 360-degree view of the Gorges Motel, peaking into different rooms and different stories with each scene. And having that many playwrights collaborate on a common world and all of its intersecting storylines is a massive undertaking worthy of admiration.

The Gorges Motel is written by Gretchen Cryer, Lynne Halliday, Isaac Himmelman, Hames Hindman, Arlene Hutton, and Craig Pospisil. It is directed by Chris Goutman. Scenic & Lighting Design are by Eric Nightengale. Costume Design is by DeShon Elem. The Production Stage Manager is Jenna Gottlieb. The Assistant Stage Manager and Prop Master is Nathan Smith. Produced by Schondeikkan Productions and Miracle or Two Productions in association with The Journey Company.