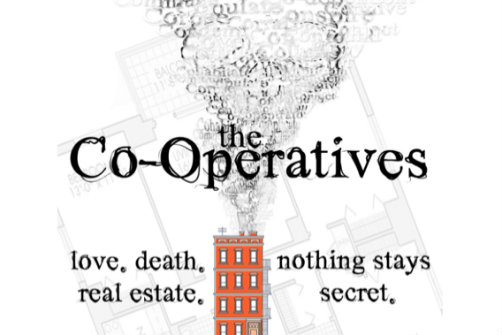 BOTTOM LINE: The Co-Operatives is a comedy about the tension that arises in a co-op building when a prime two-bedroom apartment unexpectedly becomes available.

New York City real estate is a complex topic ripe for dramatization: tension, intrigue, backstabbing. What wouldn’t you do for a rent-controlled two bedroom with a view of the park? That’s the subject of Derran Moss-Dalmau's new play The Co-Operatives.

The program notes “there’s a corpse on the floor and a conspiracy in the air” at the Barrington Court co-op. The show opens just this way—with the corpse of a co-op resident on the floor as other tenants in the building wander in to check on their neighbor. There’s Cindy (Puy Navarro) and Jon (Aaron Keller), the married couple who think the two-bedroom would be great for their family. Their pregnant neighbor Sam (Emmanuelle Bernard) also has her eye on the place, as well as hipster couple Ken & Kim (Steven Moskos and Karen Frances), and the rules- and cycling-obsessed Curt (Bautista Duarte), president of their co-op's board.

Unfortunately, as soon as we start to meet the players, the plot quickly becomes muddled. How do they all have access to the apartment anyway? They all wander in without keys, with no clear explanation as to why they're there, or how they knew they’d be able to get in. Not to mention the extremely tired joke, repeated too many times, about how none of them know the name of the deceased so they rotate through various Latino names like Jose, Ramon, Ronaldo, and Jorge (Jose Antonio Melian plays the thankless role of the corpse) when referring to him.

There are several clever ideas here about how to subvert the rules of the co-op board (Ken and Kim are actually the fourth and fifth couple to be occupying those identities; Sam’s husband doesn’t actually exist), but the plot and the dialogue are unclear and there are no identifiable story arcs. The characters often stand to the side and talk about other parties and situations to which the audience has not been introduced, or stay onstage for seemingly no reason, so it’s easy to get confused and frustrated. Director Tatiana Pandiani's staging doesn’t help us to understand either, since the actors frequently speak to the back of the stage, muffling their voices.

The Co-Operatives has some interesting ideas, but the script needs some more work before it becomes the real estate comedy it aspires to be.

The Co-Operatives is by Derran Moss-Dalmau. Directed by Tatiana Pandiani. Assistant Director is Galia Backal. Lighting Design by Alex Mannix.