By Sam Gooley; Directed by Melissa Firlit
Produced by The New Collectives
Part of the 2016 New York International Fringe Festival 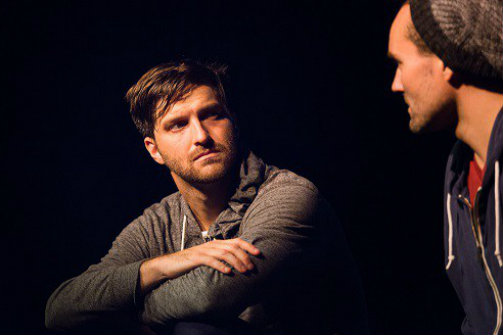 BOTTOM LINE: On the night of his bachelor party, Steve experiences what he cannot come to terms with, or even define; Steve Got Raped is a story of love, objectification, and broken expectations.

What happens when Steve (James E. Smith), a fiancé and soon-to-be father, goes through the unexpected? The morning after his bachelor party, Steve begins to think he may have been raped by Ariel (Mara Gannon), the stripper hired for the party. In Steve Got Raped, playwright Sam Gooley tackles a difficult subject and makes it easier to talk about, creating a platform on which to start conversations on masculinity and how people talk about sexual assault.

Closest to Steve are his best friend Derrick (Dan Morrison) and his fiancée Katie (Sarah Moore). The show mostly operates in scenes involving combinations of these three, scenes which show Gooley’s ear for colloquial language and his ability to build layered and dimensional relationships through specific dialogue. The actors embody this playwright’s language through larger-than-life physicality that feels completely justified in its indication of close relationships.

Steve Got Raped gives a darkly comical view into the life of someone dealing with the immediate repercussions of something he cannot quite define. This confusion and aftershock sit with Steve for the second half of the play, making every interaction with those from whom he is hiding the event grueling and torturous—the urge to scream when you can’t find the words. The audience watches Steve grapple to define something he doesn’t understand—something that, he thought, could never happen to him.

The writing is constantly straddling the line of emotional depth and personal humor—the sort of “did he just say that?” mentality that makes the conversations between three close friends just offensive enough to be relatable. Steve Got Raped does well what theatre does well: it presents a question that it does not claim to know how to answer, but gives the audience permission to comment, to engage.