By Jenny King; Directed by Julia Hinson
Produced by The Barrington Collective
Part of the 2016 New York International Fringe Festival 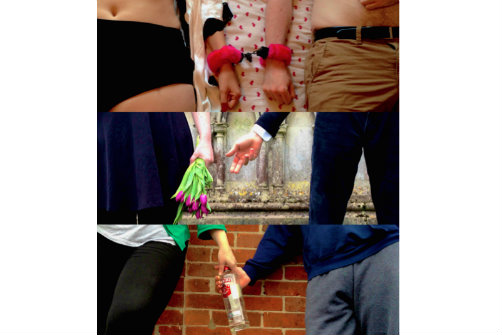 BOTTOM LINE: Playing three scenes simultaneously, Reconciling is a superb piece of theatre craft that explores the ways our stories are often more alike than different.

When theatre lovers discuss what makes the Fringe festival so special, it constantly comes back to uniqueness. At its best, Fringe allows for work that is envelope-pushing, ambitious, and risky, backed up by the passion and love of craft that sustains the theatre world. Reconciling hits all these notes and goes beyond, offering an exceptional demonstration of the art of live theatre at its best.

With Reconciling, the London-based Barrington Collective takes one big risk: the show tells the story of three couples simultaneously. What emerges is a heartfelt blending of stories that are very different on the surface, revealing how relationships can have so much in common and yet have vastly different outcomes.

The cast divides into three male-female duos. Molly (Jenny King) and Chris (David Beckett) are old exes. After a refusal of Chris’ Baptist faith caused the couple to split up, Molly comes to win Chris back after the church’s support fails her when she needed it most.

Finally, Charlie (Dillon Heape) and Jane (Katie Morrill) return from the funeral of their father, whom Jane cared for in the final years of his life while Charlie struck out on his own. The tension rises as the two argue over who was really the favored child, and both re-discover their shared affection in the wake of a great loss.

In the second half of the show, characters begin to break into each other’s stories, asking for support from one another or taking on the role of minor characters in flashbacks. As the stories move from conflict to climax, it becomes clear that reconciliation will have very different consequences for each pair. When the emotional moments become too overwhelming, characters begin to call “next!” to put another couple on the spot, and delay their own point of no return a little longer. The emotional payoff comes eventually, though, leaving one pair coming together, one finding common ground, and one left alone with their regret.

The show’s layering works because it is done with tremendous skill, both on the part of the actors and director Julia Hinson. Hinson’s staging is subtle and seamless, allowing the audience constant opportunities for discovery in small moments where Charlie points to Tate while directing a line at Molly, or actors mirror a gesture from the previous story in a very different context. The simultaneity, which could easily become gimmicky or tiresome, is expertly handled by a cast with excellent chemistry and skill, and the show is very well-rehearsed. Each story has the basic format of any good theatrical scene—there is conflict, there is catharsis, and eventually, there is resolution—but the constant layering and comparison elevates these simple stories into a spiraling, poetic exploration of life at its toughest moments. Mixing comedic and dramatic elements, the writing brings heart and sincerity to the characters, and breaks the tension at just the right times.

Reconciling’s beauty is the kind which can only happen in live theatre, and it is a joy to see a young, ambitious group of theatre practitioners harness their craft so well.