Off Off Broadway, Play
Runs through 8.27.16
VENUE #4: Abrazo Interno at the Clemente, 107 Suffolk Street 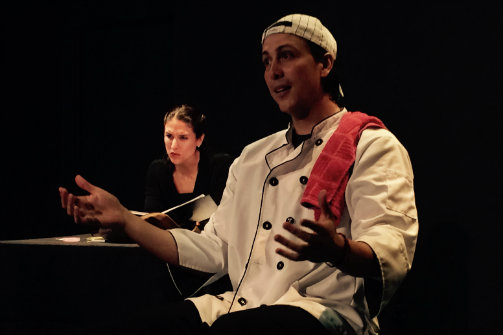 In attending Qaddafi’s Cook, the first thing you will encounter is a dramatic rarity. Either at the door upon your entrance or at least close-by is Alvaro Flores, who plays Fredy, a Mexican chef with a fondness (nay, obsession) for Jack Daniels, greeting guests as they arrive, and charmingly chatting with members of the audience long after they sit down. He walks around with a tray of watermelon, charmingly telling stories and explaining how Libyan dictator Muammar Qaddafi, who was ousted and killed by rebel forces in 2011, would require his lovers to bathe in watermelon juice to arouse them.

Even after Qaddafi’s Cook begins, Flores’s charisma thankfully never drifts. At a present day Federal Office in Mexico City, an unnamed woman (Paola Madrigal) reads the journal Fredy kept after Qaddafi hired him to be his personal chef. As the woman reads out loud, Fredy frequently adds on or even interjects entirely. Sometimes there are details he didn’t write down that he wants to speak more in depth about. Sometimes he is defensive about what is on the page, like he wants to change the story. Sometimes he just sits in silence, head bowed.

This rondo between Madrigal and Flores is powerful and well done. They don’t know each other and live in different moments in history. Fredy talks to the audience, and the woman reads aloud to herself, but as the two go back and forth to tell Fredy’s story, it becomes a conversation.

Fredy and his other chefs are on a strict routine—they visit the same house every day but take a different route so they don’t know where they are—and they're given a menu with a laundry list of rules (each dish must have rice, for example, but no white rice, and no protein should be served with fruit, etc.). Like all of Libya, they are in the middle of a storm and "must keep walking" or suffer the dire consequences that come from war and madness.

The book seemingly offers little room for Madrigal to act in a role of her own; she is, after all, speaking partially for Fredy, and the words she speaks are entirely his own. However, Madrigal is full of emotion and deliberate in each delivery. Her power stems from what she doesn’t get to say, from her expressions and reactions as she uncovers more information and comes to realizations. If anything, the fact her character doesn’t get to contribute to this history with her own words is a benefit. She is so good at what she does that it feels effortless.

The show’s only true fault is another rarity: the level of immersion the writers and actors create for the audience. Fredy interacts with the audience both before and after the performance, the dishes he discusses are seen as props, and the audience is invited to try the dishes and chat with the cast after the show). But the experience is not quite as immersive as it sets out to be. If the purpose of food is a metaphor for Qaddafi’s terror, and its existence is to make that connection more real for those in the audience, then how everyone relates to it on a sensory level should be better executed (though this might be due to festival limitations, the summer heat, and the venue). Still, Qaddafi’s Cook is beautifully done and a triumph of minimalism and immersive theater. It is equal parts intense, charming, and, like any good meal, satisfying.

The cast is Paola Madrigal and Alvaro Flores.