Murder at the Food Co-Op

Off Off Broadway, Musical
Runs through 8.28.16
VENUE #2: Flamboyan Theater at the Clemente, 107 Suffolk Street 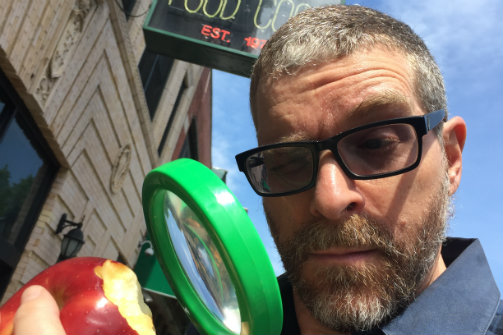 Gersh Kuntzman in Murder at the Food Co-Op. Photo by Marc Dinkin.

BOTTOM LINE: Murder at the Food Co-Op is a one-liner-heavy musical farce about politics, produce, and puns.

Israeli-Palestinian Conflict kohlrabi. Socially-responsible Satsumas. These are the obsession of the Park Slope cooperative market, the site of a mysterious murder in the Neo-Shtick Theater’s musical farce Murder at the Food Co-Op. The show is based on writer Gersh Kuntzman’s own experiences as a member-owner of the Brooklyn boutique socialist trading post, where members work shifts in exchange for access to inexpensive and locally sourced produce.

Like a manically excited episode of Law and Order, Murder at the Food Co-Op presents a “whodunit” mystery, explained through zany music and cheeky, pun-heavy jokes. The show plays out like a cross between Portlandia and The Naked Gun, mocking both the pretentiousness of hipster culture and the kitschy bawdiness of mainstream shlubs. The musical centers on the mysterious death of the market’s fictional founder Doris “Chiang Kai” Shenkman (the snarky and spirited Alex Covington), whose middle name may tip you off to her draconian, intense character. A militant locavore with a love of rules, Doris has many enemies amongst the citizens of the co-op. Detective Dick Johnson (Doug Chitel, and yes, the character’s name is intentional) is brought in to solve the caper while also affectionately poking fun at the inextricable combination of produce and politics embodied by the Co-Op.

Alex Covington, Max King, and Brittany Shaffer are particular standouts in the cast, and their strong voices transcend the unfortunate static of the sound system and raise even the bawdiest lyrics with a flourish. Composer Marc Dinkin has crafted many witty numbers for the show, including Detective Johnson’s response to the Co-Op “Sometimes a Melon’s Just a Melon” and Doris’ saucy “Queen Bee,” yet almost all the songs go on for far too many verses, repeating the same chorus and jokes so many times it becomes somewhat gratuitous. Choreographer Patrice Miller does his best to vary the scenes, cleverly using shopping carts and jazz hands to turn the store into a dance floor.

Inspired by the recent tensions in the actual Park Slope setup, where members attempted to ban Israeli products from the store in a protest of West Bank occupation, Gersh Kuntzman heavy-handedly comments on Israeli-Palestinian politics, including a jarring extended joke about mistaking Ali al-Muhammad’s baking for terrorist activity. He also has included a number of Reagan jokes—journalist Smythe reveals she once agreed with the former President’s conclusion that ketchup is a vegetable. “I was young!” she cries—which landed with the older audience members, but left many of his millennial targets cold. None of this should be surprising, though, as Kuntzman, longtime editor of the NY Daily News and Newsweek, has a history of low-brow revelry with high shock values.

Seeing Murder at the Food Co-Op is a bit like going grocery shopping when you’re hungry. Everything is a bit too colorful and loud, and you end up with junk food that doesn’t really satisfy. Though the imperfections of the show are real, there are many redeeming factors. For an audience member who loves one-liners, campy humor, and puns, this show can be a light romp, providing silly songs and energetic performances that chew the scenery like so much kale.