Houseless in Paradise & The Unsalable Thing

By Mark D. Tjarks; Directed by Dennis Gleason
Produced by Mark Tjarks in Association with Hawai'i Pacific University and
PlayBuilders of Hawai'i
Part of the 2016 New York International Fringe Festival 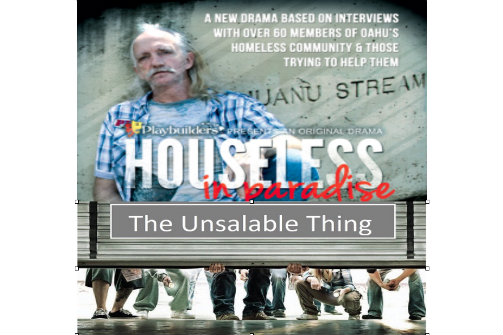 In Houseless in Paradise, the creative team tackles a problem that is local to Hawai'i, yet at the same time, universal. Before seeing this double-bill of plays about homelessness, I wasn’t aware that Hawai'i has the highest rate of homelessness per capita of any state in the U.S. I suppose, even in paradise, homelessness is still an issue that requires immediate attention. However, not only does Dr. Mark Tjarks, an English Professor at Hawai'i Pacific University, address the issue in his play with sincerity, bringing individuals’ stories to the audience and thus bringing the audience to the core of the issue, he also shows us possible solutions to the problem.

In 2013, Tjarks interviewed more than 60 members of Oahu’s “houseless” community, volunteers, and politicians, including a state senator and the city’s and State’s coordinators on homelessness. These comprehensive interviews make for an impressive creation, allowing us to see the issue close to home by witnessing the day-to-day struggles of Oahu's homeless. In his story, Kamuela (Christopher Tse) points out how people with a normal, privileged life forget how to appreciate the ordinary things in life. What we also easily forget is that homeless people are not lesser people, but individuals hit by tragedies. In Houseless in Paradise, the interviews become people of flesh and blood, people we can know and care about: someone’s brother, sister, or daughter; someone’s former employee or employer; someone’s teacher or neighbor. As various snapshots of different people come together, the play tumbles on like streams running towards the ocean, all becoming intertwined with a familiar tune: ”the answer my friend, is blowing in the wind."

One highlight is Yvette King’s portrayal of Twinkle Borge, the leader of one of the homeless communities. Borge's story shows a different side of the homeless community: one of strength, fellowship, and love. Borge remarks that they were once victims, but then became survivors, and are now conquerors. Another memorable story is that of Cindy (Julia Torres), who was sexually abused by her stepfather for 11 years before she became homeless. Torres beautifully relates Cindy's story, engaging us in a deeply emotional journey. Cindy concludes by declaring: “If my story can help somebody, just one person, all the things I went through, the pain, it’s worth it.” I truly believe this is what the play is trying to do.

At the end of the program, one of the characters tells the story of how a little girl finds thousands of dying starfish on a beach. She picks one up and throws it into the sea. Those who see her ask: "how can you make a difference? There are thousands of starfish on the beach." The little girl holds up a starfish and answers: "for this one, I am making a difference." Before the lights go down, the final ensemble gesture is of each person throwing a starfish: a truly moving image that leaves us with hope of making a difference.

Before Houseless in Paradise is The Unsalable Thing, a related "bonus feature" in which contestants bid on the storage contents of the deceased renter, only to discover he had been living inside the storage unit since he became homeless. This one-act is based on the real-life experience of Jeffery Terry Sousa, an HIV-positive homeless man who is a true survivor of all the hardship he has encountered.

Houseless in Paradise and The Unsalable Thing is one of the most powerful pieces of documentary theatre I’ve seen. It doesn’t show projections or statistics, nor does it overwhelm the audience with visual aids and special effects. The simplicity of the production highlights the tenderness and authenticity of the stories. I was drawn to every one of the individuals, and was engaged in every single story they had to tell. Theatre has the power to heal, to connect, and to transform. Tjarks and director Dennis Gleason, as well as everyone in this impressive cast, understand that completely. True, one person can only make a difference for one starfish at a time, but hopefully the team of people who care will continue to grow.