Honour: Confessions of a Mumbai Courtesan 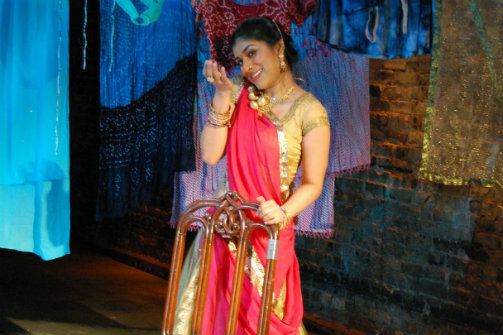 Dipti Mehta in Honour: Confessions of a Mumbai Courtesan. Photo by Jessica Mentis.

BOTTOM LINE: Anchored by Dipti Mehta’s astonishing performance, Honour is a dark, troubling, yet humorous and vibrant take on the life of a Mumbai prostitute.

The subject of Honour: Confessions of a Mumbai Courtesan would seem to make for a dark, uncomfortable play, and while by no means does Dipti Mehta’s one-woman show shy away from the more brutal aspects of its story, it also reveals itself to be full of life, humor, and beauty. This is the show’s great triumph.

Honour tells the story of a young Mumbai prostitute. She is forced into the business by her mother, who herself was sold to a pimp as a young girl. She dreams of escaping this life, and of leaving Mumbai to study medicine. There is no real propulsive engine of a plot here. The story takes the form of a yarn, told at the protagonist’s leisure. However, there is an engaging narrative, with an ending that is both logical and satisfying.

Honour lives and dies by Mehta’s performance. It is, after all, a solo show, minimalist in execution (the sole bit of staging is a wooden chair). Thankfully Mehta is up to the task. She effortlessly switches between numerous characters—our protagonist, her mother, a pimp, an old woman—and we never have trouble distinguishing them. Each has a distinctive bearing and manner of speaking.

Mehta makes use of Hindi words throughout, dropping them into her dialogue casually and organically. Before the show, audience members are handed a flyer in the program, which helpfully defines several of them. This lends the show an air of authenticity and shows faith in the audience’s ability to keep up.

Honour ably juggles tones and styles, combining heartbreaking storytelling with jokes and dance numbers. It never feels misjudged or awkward in its efforts. If there’s any criticism, it’s that Honour is a bit long; a more economical version might prove even more effective. Other than that, Honour is a highly successful piece of theater.

It’s also worth mentioning that the show is partnering with Apne Aap, a charitable trust dedicated to saving girls from the sex trade in India. A portion of the proceeds will be donated to this cause.

Honour: Confessions of a Mumbai Courtesan is written and performed by Dipti Mehta. Directed by Mark Cirnigliaro. Original Music is by Chetan Davdra/Rhythm Tolee. Choreography is by Monica Kapoor. Sound is by Matthew Bittner. Lighting is by Jason Flamos. Stage Manager is Sarah Martens. Costume Consultant is Scott Westervelt.