THIS SHOW IS PART OF FRINGE ENCORES, PLAYING AT SOHO PLAYHOUSE FROM 10.15 to 10.29.
FOR TICKETS AND MORE INFO VISIT sohoplayhouse.com. 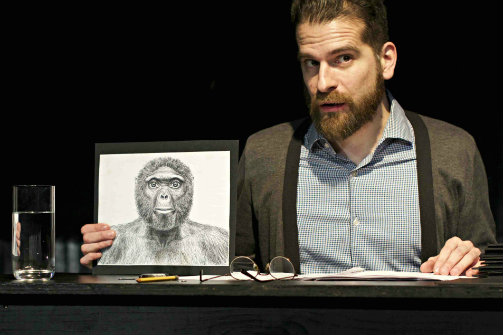 Carlos Dengler’s search for the missing link has led him deep into the connective tissue between the heart and the mind. Weaving biological anthropology, western philosophy, and a cultural history of heavy metal into Dengler's personal journey, Homo Sapiens Interruptus is an intellectual and emotional pastiche that is as fascinating as it is utterly heartfelt. He also makes all of the above seem like the coolest stuff ever.

This solo show’s narrative, which edges at times on the overly complex, is ultimately saved by the simplicity of its telling. Spalding Gray fans rejoice! For aside from the occasional light and sound cue, there is no spectacle to behold here—just a man at a desk with placards for illustration. And no, Dengler doesn’t provide Gray’s explosiveness, but much of what he lacks in theatricality he makes up for in his absolute likeability and writerly manner. With the help of Scott Wesley Slavin’s direction, Dengler is able to subtly shift to great effect between seemingly small moments (losing his dreadlocks), and the great ideas that give them massive weight (Kierkegaard’s angst). Some performance polish, however, has been sacrificed for intellectual clarity, as Dengler relies on notes sitting in front of him on his desk throughout the show.

Be warned, this show is not for those who crave gut-wrenching, door-slamming drama in every scene. Much of Dengler’s journey occurs on an intellectual plane where the work of 18th-century philosophers can map onto the implications of the first bipedal hominid, “Arty.” Fortunately, Dengler's experiences growing up in a tumultuous 1980s Queens with a depressive father and a bully-rife Catholic school system, coming to rely on heavy metal as an emotional outlet, and his eventual rise to fame as a member of the rock band Interpol compose a journey as fascinating to us as the large ideas are to him.

Dengler’s use of heightened language throughout the show comes, as it often does, as a double-edged sword, sometimes sacrificing some much-needed immediacy in narrative for heady poeticism. Some of the metaphors resonate more deeply than others, and occasionally the audience is left to choose for themselves which ones are worth keeping in mind. This comes, however, as a natural cost to the type of story being told. We aren’t hearing about the time he climbed the biggest mountain in North Dakota. We’re being let in on an examination of a life, and the large ideas that have helped ease the pain of its mystery. Perhaps the mountain would provide dramaturgical soundness (i.e. singular conflict-resolution), but would eliminate what makes this play so worthwhile: the brilliant flashes of larger-than-life thinking, arrived at through the unpredictability of a single man’s amazing life. It’s a show that will make you think...hard.