Written by Ezra LeBank, based on The Little Prince by Antoine de Saint-Exupéry;
Directed by Olivia Treviño
Produced by Curbside
Part of the 2016 New York International Fringe Festival

THIS SHOW IS PART OF FRINGE ENCORES, PLAYING AT BARROW STREET THEATRE FROM 9.24 to 9.30.
FOR TICKETS AND MORE INFO VISIT sohoplayhouse.com. 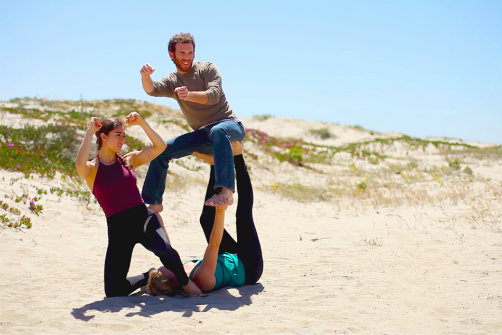 BOTTOM LINE: A charming acrobatic adaptation of The Little Prince.

The Little Prince, Antoine de Saint-Exupéry’s beloved “children’s book for grown-ups,” uses the tale of a stranded pilot, an intergalactic prince, a beloved rose, and a wise fox as an allegory for learning to see beyond worldly appearances and trust one’s heart. With Flight, Long Beach-based physical theatre company Curbside transforms Saint-Exupéry’s fable into a brief-but-charming “sequel,” encapsulating its worlds and themes through striking acrobatic dance.

Flight loosely starts where Saint-Exupéry’s tale leaves off, following the book’s essential storyline with a number of creative twists. Six years after the events of The Little Prince, the Pilot/Narrator (Ezra LeBank) has forgotten the lessons of his adventures, and takes to the skies to relocate the Prince and recapture his lost secrets. As in the original, a plane crash strands him in the desert, but here the “Prince” he meets is a tiny girl (Cynthia Price), who has left her island kingdom and mercurial Cactus (Taylor Casas) in search of greater knowledge. This version’s Prince crosses islands and oceans instead of planets and galaxies, but each stop on her journey reveals similarly baffling examples of human folly. Encounters with such characters as a general who commands no one, a businessman who buys and sells the waves, and a jester without an audience expose the inherent nonsense of adult “sensibilities” and the hollowness they disguise. Now, inspired by a kindly sea turtle and tempted by a deceitful stingray (Casas again), the Prince and Pilot form an unlikely bond as they seek their respective ways home.

Curbside’s stunning acrobatics carry us seamlessly through the story. Effortlessly transitioning through flips, suspensions, and human towers, the company evokes Flight’s sea, sky, and desert landscapes and the plants, animals, vehicles, and people within them. This movement style reads especially well in the play’s underwater sequences, as the performers mimic fluid ocean currents and graceful sea creatures. Similarly, the trio’s outstretched arms and a clever seated balance form an uncannily-convincing airplane. The show employs simple costumes and only the barest of props (blinking flashlights and a fluttering cloth “stingray”), but the performers’ physical virtuosity renders further material trappings largely unnecessary.

At a breezy forty-five minutes, Flight captures its source material in fairly broad, impressionistic strokes; a little more time spent with particular characters or unpacking richer symbolic elements might strengthen its overall effects. Nonetheless, Curbside takes us on a delightful journey, inviting us to briefly abandon preconceptions, see with our hearts, and join them in Flight.

The cast is Ezra LeBank, Cynthia Price, and Taylor Casas.