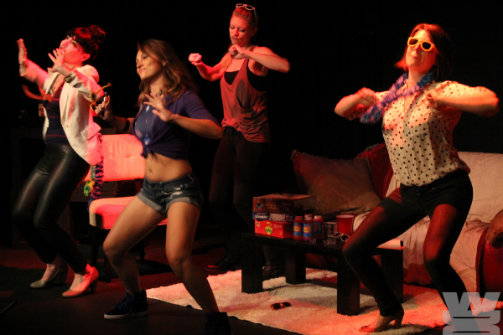 BOTTOM LINE: A must-see hilariously genuine play about sisters and future sisters-in-law who plow into each other but come out on top.

If Bonnie’s Future Sisters were the only play you had ever seen, you would be led to believe that the representation of women in professional theatre is roaring and strong. Playwright-director Meghan Gambling has crafted a satisfyingly truthful story about women, sisterhood, jealousy, and forgiveness. The material is especially relatable to women of course, but also to those who love them. This intoxicatingly poignant play should be, and hopefully will be, one of the most memorable shows in this year's FringeNYC.

Bonnie (Sascha Alexander) is engaged and just came out with a best-selling self-help book about successful women in the workplace. She is the type of person to throw her own engagement party, complete with a “Congrats Bonnie! You did it!” banner, feather boas, bubbles and booze—and we can’t forget her favorite part, the board games. Compared to her estranged sister Corey (Kristen Rozanski), who is a strong, sarcastic, blunt, and understandably brooding lesbian, Bonnie is endearingly perky, cheerful, and optimistic. She has also invited her soon-to-be sisters-in law: Kayleigh (Sarah Greyson) and Kayleigh's teenage sister Larissa (Emily Jordan).

There is more than meets the eye to every relationship, something each woman learns as the truth unfolds and the past emerges to the surface. While Larissa goes missing and Bonnie rises to the mission of finding her, straight-girl Kayleigh manages to seduce Corey in a deliciously awkward scene that leaves you feeling both offended and congratulatory for Corey. In many ways Bonnie feels closer to Kayleigh and Larissa than to her own sister, but in the end she realizes that there is a potential future for their relationship by way of open communication and empathy for one another.

One of the strongest aspects of Bonnie's Future Sisters is that you won’t find a model of morality. Bonnie is self-indulgent, Corey is often cold, Kayleigh is too confident for her own good, and Larissa is a seventeen-year-old with a DUI. And yet they are all extremely likable, with justified opinions about their sisterly counterpart. What’s interesting is that each character is sure of themself and their own identity, but their sibling is quick to remind them of who they really are. There are gripping nuances within the actions of each character that beautifully illuminate the subtleties of the text and help to create fully-developed characters. All four of the women are so authentic they might have been plucked right from your own life. They are captivatingly distinct from one another as they go through emotional ebbs and flows when met with conflict, making the production absolutely engaging from moment to moment. The realness of the relationships and personalities is both an effect of Gambling’s first-rate playwriting chops and the actors’ impressive performances across the board.

If gender equity exists in the future of the entertainment industry, Bonnie’s Future Sisters will be right up there alongside Tracy Letts’ August Osage County and Stephen Karam’s The Humans. It certainly deserves to be, and I for one am hopeful.