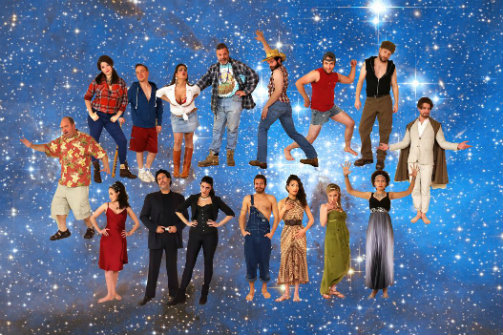 What if a bunch of American legends became strippers? This is the type of question that seems made for the Fringe Festival and is the basis of the comedy American Strippers, by Kevin Broccoli. At Americana, the strippers are Casey at the Bat (Gian Raffaele DiCostanzo), Davy Crockett (Justin Pimentel), Johnny Appleseed (Michael Puppi), and Pecos Bill (Rico Lanni). It's also the location for a bachelorette party for Aphrodite (Kerry Giorgi) before her wedding to Apollo (Patrick Keeffe). (A warning to Greek mythology purists: some liberties are taken with these characters.) The idea of combining Greek and American mythology is a good one, since both traditions often deal with similar themes, such as heroism and hubris. The problem with American Strippers is that, even with its long run time, it doesn't do enough with this concept, and it's unclear which point Broccoli is trying to make about this country, if any.

The scenes vary between long monologues, dialogue between characters (usually in pairs), and the strip numbers. And it's in the monologues that Broccoli always seems on the cusp of something. For example, one monologue is about the similarities between history and mythology—both are primarily written by men, etc.—but because there are so many characters and romantic entanglements, we quickly move onto the next thing.

The strip numbers, choreographed by Ronald Lewis, are fun, though at times the actors aren't completely in sync. And it is refreshing to see so many sexually fluid characters—fitting, since this is partly based in Greek mythology, after all.

American Strippers is written and directed by Kevin Broccoli. Choreography is by Ronald Lewis.