The Wreck of the Spanish Armada 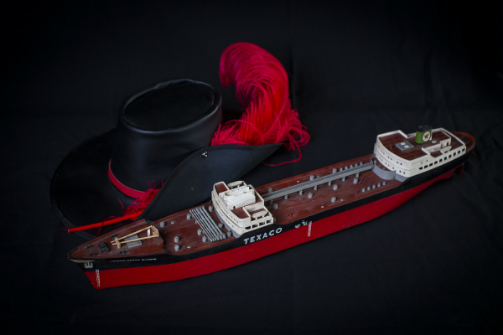 The Wreck of the Spanish Armada is a play rich with excellent dialogue, steeped in nautical themes, and utilizing vivid imagery. It unfolds the complicated and polarizing story of a woman and her loves, representing opposing sides in a corrupt oil empire in Mogadishu. The story evokes characters on the brink of finding their true destinies.

Set in a modern day Paris hotel, on the same day Dr. Anne Cloudy (Laura Emanuel) has separated from her husband, the drama intertwines the conflicting worlds surrounding the oil business. Intense poverty, as well as political and socio-economic strife, are contrasted by immense wealth and profits that oil traders on Wall Street enjoy. Corrupt leaders and helpless aid workers have the tables turned. Dr. Cloudy is presenting as the first woman to address a staunch male panel. She is confronted by her long lost love Drake (Bruno Oliver), coincidentally her estranged husband’s name.

Anne and Drake share stories of the time that has passed since they had last been together in youth. Drake’s heartbreaking motivations, including the life and loss of one boy in his care, become more empowered with each revelation. Drake began his career as an aid worker, who transforms into a leader to provide sustenance to his community and defend them against raging war lords. He in fact becomes a pirate of sorts, to have his people share in the profits and benefits of their lands that the oil tycoons strip away.

Anne’s estranged husband, perceived by the public as a great financier and oil trader is his nemesis. The drama evokes questions of what success really means. Right and wrong are lines that are blurred.

Anne is beautifully portrayed by Laura Emanuel, a strong and intense heroine. As her lover Drake, who has crossed the seas searching for Anne, Bruno Oliver is riveting. Great performances and rich dialogue make this play highly engaging. Luckily, love prevails, even in the face of death.