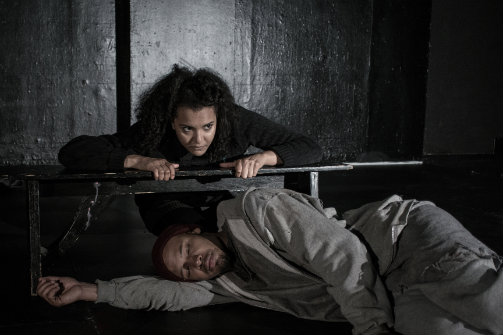 The Broken Record is a poetic exploration of humanity and grief from all angles. The piece, about police brutality against black people in America, begins to delve into the complexities of our modern-day nightmare. Yet it does not attempt to figure it all out—and rightfully so. How can such an entanglement of history be sorted out in a single hour? Jiva (Jonathan Louis Dent), a homeless man in New York City, is trapped in time as his consciousness replays a single moment over and over: an innocent black student named Zachary (Rodney Richardson) is shot by a white cop (Christian DeMarias) next to the bus stop where Jiva is posted. Shadow (Rebecca S’manga Frank), an oracle-like figure, guides Jiva through each recurrence of the shooting, urging him to discover more each time. Through spoken word and stellar acting, playwright and actor Jonathan Louis Dent and director Megan Sandberg-Zakian have created a thought-provoking piece that should not be missed!

It’s challenging to describe a show that gives such a visceral feeling; sometimes you just can’t put this sort of feeling into words. I will say that Dent’s script is exquisitely crafted and the actors do it justice with fully-realized characters and relationships. You could hear a pin drop the first time the cop pulled the trigger—and actually, every time after that. Jiva, Zachary, and Officer Jacob freeze as Shadow prophesizes, “Do you know the secret of the lotus flower? What does nothingness mean to you? Can you find joy in suffering? Must we fear what others fear? Do you want to know the truth behind the veil? How are you going to save him?” While she’s technically asking Jiva these questions, she also poses them to the audience. Shadow rewinds the hands of time and the scene plays out again, allowing Jiva another chance to potentially save Zachary. At first, Jiva is in denial that he can do anything to help, but over time Shadow convinces him otherwise. In one iteration, Jiva befriends Officer Jacob and learns how his partner was killed on the job and how he can’t track down the criminal he’s been after. “Lately all I see is blood and rage,” Officer Jacob confesses to Jiva. Despite the gained compassion and friendship, Zachary is again shot. It feels like beating your head against a wall with no relief.

The momentum builds as Jiva seems to be getting closer and closer to saving Zachary. But is that the final destination of his journey towards understanding? Jiva is representative of the millions of people in America who feel an overwhelming sense of helplessness. We are tired, frustrated, enraged, and yet still somehow hopeful that the broken record will eventually stop repeating. The poetry of The Broken Record allows the audience an hour of reflection as we go on the journey with Jiva to try to make sense of the nonsensical. I am grateful for the generosity of the artists involved and the meditation that they have provided here.