The Absolutely True Science of Nerds 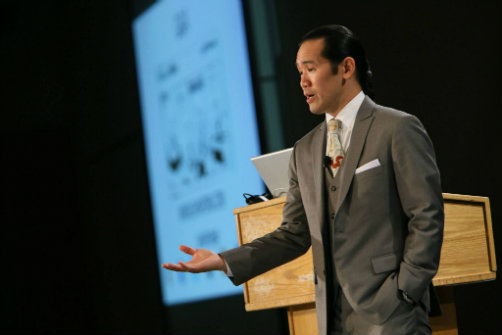 The first lecture, “Batman: Origins and Training Secrets of the Dark Knight Detective,” explores the physical science and behavioral techniques behind Batman’s extraordinary abilities. We learn that thanks to intrinsic motivation and rigorous self-discipline, the hero sports a Mensa-level IQ, Olympic-caliber athleticism, and, surprisingly, amazing dance moves. Theerakulstit makes no promises that we, too, can reach such superhuman heights (though, as evidenced by his “Batweek” of training, he’s certainly tried), but suggests that through such practices as cross-training, intellectual stimulation, and goal-setting, we can “become the best bat-version of our bat-selves.”

“Star Wars vs. Star Trek: Modern Perspectives of Past Future and Future Future Technology” debates whether Wars’ long-ago, faraway galaxy or Trek’s futuristic final frontier is the more advanced society. Theerakulstit considers the weaponry, space travel mechanisms, robotics, and culture of these deeply polarized fandoms, touching on the physics behind phasers, light-speed travel, and teleportation. Ultimately, he finds Star Trek to have the advantage, “because our future should always be greater than our past.”

Between the second and third talks, Nerds features a Godzilla-inspired burlesque performance by “guest lecturer” Jo “Boobs” Weldon. Sporting a dinosaur mask and flanked by fellow burlesque performers Iris Explosion and Anja Keister, Weldon strips down to a thong and pasties while gyrating a long lizard tail. While this interlude certainly offers a break from the show’s pseudo-academic framework, it seems a little out of place and reads as more bizarre than sexy.

Finally, “Godzilla: History, Biology, and Behavior of Hyper-Evolved Theropod Kaiju,” draws upon the physiology of Cretaceous-era dinosaurs, the science of mutation, and bio-behavioral evolutionary patterns to study the giant lizard. Theerakulstit even offers tips for surviving a Godzilla attack, from the obvious (Don’t live in Japan) to the practical (slow him down by lowering his body temperature). This lecture over-relies on PowerPoint sight gags, but Theerakulstit fits in some interesting biological and series-related factoids between the funny photos of Godzilla action figures.

After each talk, Theerakulstit opens the floor to audience questions. At the performance I attended, the decidedly nerdy crowd engaged in hypothetical discussions about Marvel characters, debated whether Han Solo or Spock is cooler, and poked fun at Theerakulstit’s conflict of interest as a Star Trek role player. Though it might function better as a shorter comedy routine than a ninety-minute show, Nerds offers up just enough science and sci-fi trivia to whet your appetite for both.