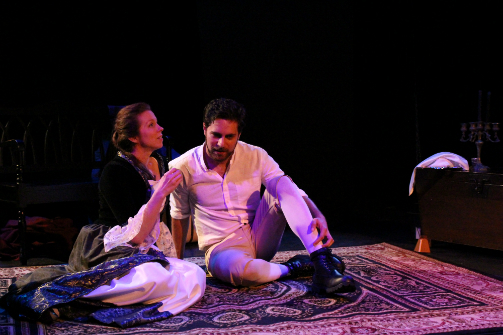 1746 Prussia seemed like quite the feat for a Fringe show. Enough to peak my interest. And indeed costume designer Hillary Manning has taken us all the way there—as far as my suspension of disbelief is able to understand what an eighteenth-century-no-longer-existing-empire looked like. What’s wonderful is that director Kai-Hsiang Tu along with playwright Ryan Feyk (who also plays Waltz) don’t let them sound like whatever we imagine they sounded like. Instead we get to hear the delightful color of a “fuck you” every now and then. The language manages to keep the play moving and grounded in a production that could have been stale without it. I’m a little embarrassed to admit I'm fuzzy on some of the plot details. Perhaps I ended up in the unluckiest seat in the house, but from my angle Cliff was betrayed by the ever-present sound of rolling waves during much of its running time, each peak of which marred the dialogue. Sadly, I missed a good deal of the set-up for this unnecessary bit of sound design.

We’re in Dunkel’s house (played by Jim Anderson who is born to play this part), a raving bachelor with a clear injury to the right side of his body; he's a former solider. Brother Guy (the charming Greg Carere) returns after, it seems, quite some time with new bride Rosamunde (a delightfully unsettled Tracy Lynn Farber) who has a secret. Dunkel’s the only host he knows how to be (a bad one) and is quick to engage in contentious political talk with Rosamunde about the ongoing war. The conversation has echoes of Putin’s current yet archaic land grab in Ukraine. We also learn of a special former lover of Rosamunde’s, the misguided Elsa (a sympathetically distraught Samantha Leeds) who soon into the play comes for an unexpected visit. She has the qualities of the eager, young, and taken advantage of Ilse of Wedekind’s (or Stephen Sater’s, if you like) Spring Awakening. Leeds turns in a convincing, waifish performance.

Scenic designer Brittany Vasta has made the most of a bare bones Fringe aesthetic with some fancy looking chairs, a rug, a chandelier, and a more abstract looking, slanted wall—a kind of cliff perhaps. Yi-Chung Chen successfully crafts environments that flow from a stormy night, to a calm yet foreboding morning, and even a cliff side simply executed with director Kai-Hsiang Tu by standing on the edge of a piece of furniture.

Hazard Rep seems like its starting to do some theatrical damage in the city, proudly proclaiming themselves as young, scrappy, and eager. That’s the recipe for success in this town. I look forward to more of their work. I’ll be eager to see what they can do outside of the festival setting with all resources at hand.