The Medea of Euripides

By Euripides; Directed and adapted by Eric Loscheider
Produced by Natalia Plaza and Olivia Pane

Off Off Broadway, Adaptation
Runs through 2.23.20
Theater for the New City, 155 First Avenue 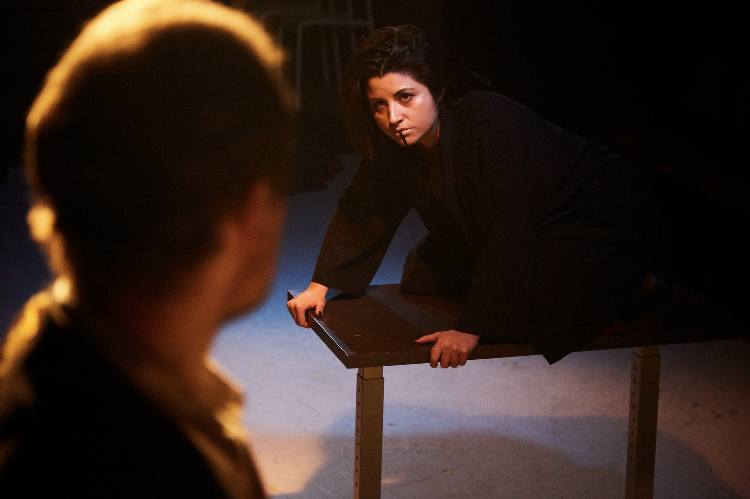 Natalia Plaza in The Medea of Euripides. Photo by Laura Betty.

BOTTOM LINE: An inventive, stylized, and sympathetic take on one woman's desperation and fury, dual emotions that repeatedly collide throughout Euripides' 2400-year-old play.

Filicide, the murder of a child by a parent, is a stunning, horrifying crime, no less so today than when Euripides' Medea was first performed in 431 BCE. Yes, more than 2000 years ago, audiences were stunned to see a drama about a betrayed woman who avenges her disloyal mate by killing their kids. It's a terrible, unimaginable crime, made worse, of course, by sexism, since mothers who kill have always been deemed the lowest of the low, the coldest and most demented of all murderers.

Nonetheless, questions nag. Regardless of the era in which such killings take place, we ask ourselves the same reflexive questions that have likely been asked for centuries. What underlies the impetus to destroy one's offspring? Is it enough to diagnose mental illness, or are other variables at play? Why does gender change our reaction to the crime? And do greed and the desire to elevate personal standing mitigate an atrocity like child murder?

The Medea of Euripides, adapted by Eric Loscheider but reliant on Gilbert Murray's English translation of the Greek, mines these concerns. Alongside a careful rendering of the original play, a Greek chorus of five women debates the issue in two distinctly contemporary venues: a laundromat and the recording studio of  a true crime podcast. These discussions—quick and pointed—offer an illuminating tie between past and present.

Still, it is Natalia Plaza's riveting portrayal of Medea, and her soliloquies and interactions with her philandering husband Jason (an equally compelling Alex Mikoulianitch), that offer insight into her betrayal and what it meant for her to lose her partner, her home, and her social standing as a result of Jason's infidelity. As we hear Medea describe the impact of Jason's rejection, and his opportunistic choice to align with the daughter of the king, Medea becomes a sympathetic character, a rejected and pained victim of someone she trusted and loved. All told, while the play does not condone her murderous act, it provides context; in the end, Medea is no monster.

The play is highly stylized, and Olivia Pane's choreography and Alex Bartenieff's lighting design work in tandem to allow the actors to imply rather than pound many of the play's most powerful assertions. Likewise, Loscheider's staging—unlike other adaptations (including the one now playing at BAM), we do not see Medea kill her sons. Instead, tightly knotted pieces of cloth serve as stand-ins for the children—white when the "kids" are alive and red when they aren't—to indicate what has happened. The streamlining works. What's more, the chorus adds humor, as well as a modern spin on a story that has been told and retold.

Still, it's an undeniably terrible tale, something Loscheider acknowledges in the program: "Human history is the history of sacred beings doing profane things...Jason's perfidy in the name of political expediency still galls us at a time when our government leaders have made the shattering of oaths a ritual practice, and speaks to how little we have changed. 2400 years after Medea premiered, we are still outraged by negligence, self-dealing, and deceit..."

Indeed. But we're also still fascinated by the magnitude of the crime and we watch, again and again, in an effort to make sense of the tragedy at the heart of the story.

(The Medea of Euripides plays at Theater for the New City, 155 First Avenue, through February 23, 2020. Running time is 80 minutes, no intermission. Performances are Thursdays through Saturdays at 8, and Sundays at 3. Tickets are $18 ($12 for seniors) and are available by calling 212-254-1109 or at theaterforthenewcity.net.)