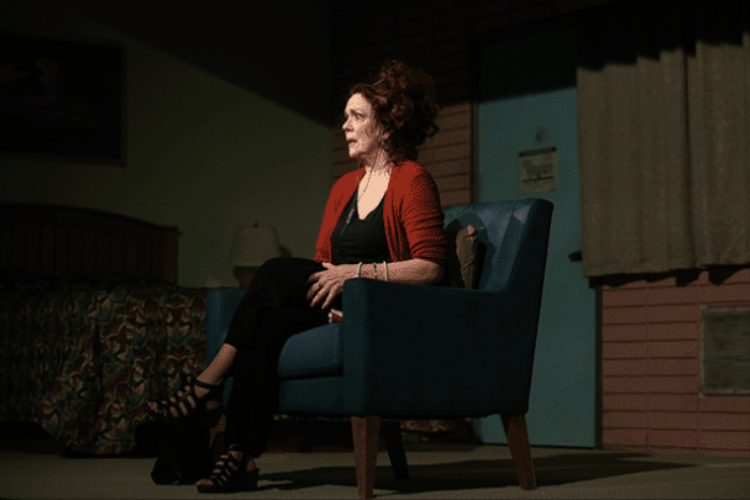 BOTTOM LINE: An incredible real-life story of abuse and terror meets an equally incredible performance, resulting in a theatrical experience that's more—way more—than the sum of its parts.

You may have heard that Lucas Hnath's new play, Dana H., is 75 minutes of lip-syncing. This is inaccurate in a couple of different ways: first, because there is a section where Deirdre O'Connell, who plays the title character, disappears from the stage, leaving her voice (or rather, Dana's—more on that in a minute) behind; and second, because to describe what O'Connell is doing for the rest of the show merely as lip-syncing is to willfully misrepresent the wonder of her performance. Based on taped interviews with Dana Higginbotham, Hnath's mother, Dana H. is a thoroughly unique, moving, and disturbing experience.

Over the course of the play, Higginbotham discusses a manuscript she has written about her experience as a victim of violent crime. The manuscript is her testimony of being stalked, abducted and brutalized by a man she met through her job as a chaplain in a hospital psych ward—a man she had tried to help. This material would be challenging to navigate even in a more orthodox text; however, O'Connell is obliged to perform not only Dana's words, but all the minutiae of her speech: pauses, intonations, laughter. The eyes may be the window to the soul, but for O'Connell, the voice is the key that opens the door to this character and her ordeal. Her performance is a masterful feat of subtlety and focus.

What we see, and hear, as Dana tells her story is a harrowing account of how a woman—educated, professional, connected to a community of faith—had her life destroyed by a violent man and the dysfunctional system that allowed his abuse to continue for months upon months. Listening to her speak, you understand why, after hearing the recordings, Hnath decided not to use them as the basis for his play, but as the play itself. (According to Higginbotham, she hadn't really told him much about what happened; one can only hope the interviewer, Steve Cosson, gave him sufficient warning before he listened.) Director Les Waters and sound designer Mikhail Fiskel have, like O'Connell, done delicate, detailed work that deflects attention from itself and back onto Dana, where it belongs.

So about that part of Dana H., mentioned earlier, during which O'Connell is briefly unseen but Higginbotham's recorded voice remains. By this point, we are so thoroughly absorbed in Dana's story and O'Connell's performance that to be so forcefully reminded that the two are actually separate is truly startling (this despite the fact that O'Connell wears earbuds that are fully visible to the audience). But the full power of this departure is yet to come; when it hits, you may feel sheepish for ever having doubted that this "lip-sync" play was the real deal.

(Dana H. plays at the Vineyard Theatre, 108 East 15th Street, through April 11, 2020. The running time is 75 minutes with no intermission. Performances are Tuesdays through Thursdays at 7; Fridays at 8; Saturdays at 3 and 8; and Sundays at 3. Tickets are $79 - $120 and are available at vineyardtheatre.org.)

The cast is Deirdre O'Connell.