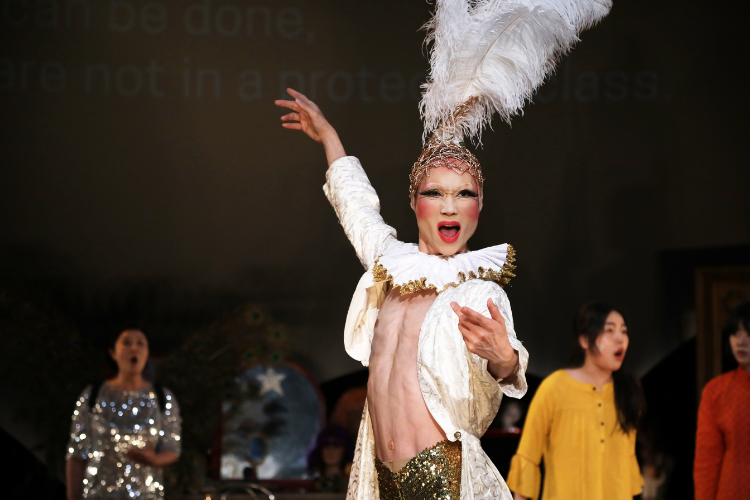 Long before Manhattan was awash in celebratory rainbows for "Stonewall 50," queer lives existed. And mattered. Harmodius and Aristogeiton were among the many couples who frolicked in ancient Greece. In another part of the world, Chinese politician Dong Xian, a Han Dynasty leader, and Korea’s King Hyegong lived out loud, refusing to hide or censor themselves. Nonetheless, both were reviled for their same-sex attractions. In fact, the King was killed by his enemies in the 8th century AD, after two enormous earthquakes leveled the land he ruled. His adversaries interpreted the destruction as God’s displeasure over homosexuality, a hateful judgment meant to drive queer life from public view.

All told, the production, written by South Korean playwright Byungkoo Ahn, and performed in both Korean and English, is exhilarating. Each vocalist is capable of singing opera as well as pop, and the dancers are unfailingly graceful. Orlando, the nominal leader of the eleven-fruitcake ensemble, serves as a narrator of sorts, and is beautifully played by More Zimin, Korea’s most prominent drag star. It’s a gender-bending, evocative, and emotionally resonant presentation. Supplemented by live and computer-generated music from the Los Angeles Laptop Collective, this is a show that defies categorization. It’s pure, simple pageantry.

Part history lesson and part flamboyant celebration, 13 Fruitcakes is by turns joyful and sobering, entertaining and inspiring. As part of La MaMa’s Stonewall 50 series, it celebrates queer life, but it also reminds us, should we need to be prodded, that long before the Stonewall rebellion, queer folks were living life, running governments, making art, writing books, and defying the social conventions of their era. Indeed, as we toast the Stonewall riot that set off the contemporary LGBTQ movement, let's also lift a glass in thanks to those who made this movement possible.

(13 Fruitcakes played at the Ellen Stewart Theater at La MaMa, 66 East 4th Street, June 13 through June 16, 2019. The running time was 85 minutes with no intermission. Performances were Thursday through Saturday at 7; Sunday at 3. Tickets were $25 ($20 student/senior). For more information visit lamama.org.)