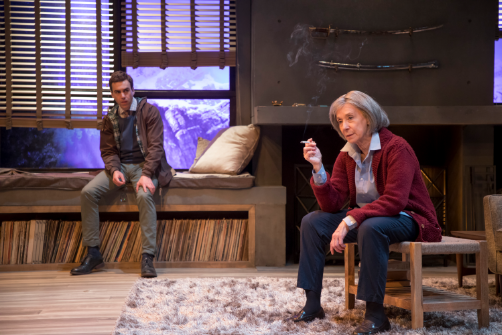 BOTTOM LINE: A battle of wits between author Patricia Highsmith and the young publisher who thinks he can convince her to write one final book before she dies.

The cozy abode featured in Joanna Murray-Smith's Switzerland—by scenic designer James J. Fenton—is a place I would love to venture into. A window with cracked blinds shows a glimpse of the Swiss Alps in the distance; shelved in the base of the window seat are hundreds of records. Guns and swords are on display, along with a stunning wooden roll-top desk, complete with typewriter and small cat statue. With firewood stacked floor to ceiling next to a glowing fireplace, along with a beautiful slatted wall, the modern feel of this mountain getaway made me eager to look for an Airbnb in Switzerland—until we were introduced to the surly owner of the house, when all of my warm feelings disappeared.

That woman is Patricia Highsmith (Peggy J. Scott), the famed author who wrote twenty-two novels and lived quite an interesting life, going from Texas to New York before ending up in the Swiss Alps. In Switzerland, a fictionalization of her final days, Edward (Daniel Petzold) pays a visit from a New York publishing company to convince her to write one final book. As a longtime fan, Edward is confident he can get her to agree to one more story about her popular psychopathic character Mr. Ripley. And despite her pride it seems she might be in need of his help. Indeed, both characters are not completely who they seem.

The most enjoyable moments are when we see these characters' walls being broken down, and we get a sense not just of the complexity of these people, but also of the talents of these two actors. As Edward and Patricia struggle for the upper hand in this "cat-and-mouse game of wit and wiles" (to quote the press release), there is a beautiful give and take when one concedes to the other. And there are some moments that are powerful due to the specificity and subtlety of the acting. For example, as Edward launches into a description of Patricia's ability to create an entire world through her writing, something about his description clearly triggers her. Vulnerable and uncomfortable as Patricia, Scott reflexively puts her hands in her pockets. Drawn into what Edward is saying, Scott lifts her chin—we can see her mind taking in what she is hearing. Her lips part and she slowly takes a breath. What may well be a deliberate acting choice appears completely organic, a total immersion of actor into character.

One thing I respect about Switzerland is playwright Murray-Smith's ability to inspire abstract thought. Different audience members might well come away with varying ideas about what is actually happening plot-wise, especially in the show's second half. This ambiguity might frustrate those looking for a tidy, clear-cut narrative; it certainly makes it difficult to guarantee the audience will come away with any clear message. But then again, perhaps that is the intent, either of the playwright or director Dan Foster. For those who enjoy interpreting a play on their own, Switzerland is certainly a show that will make you think.

The cast is Peggy J. Scott and Daniel Petzold.