This run is closed. For more information visit fringenyc.org 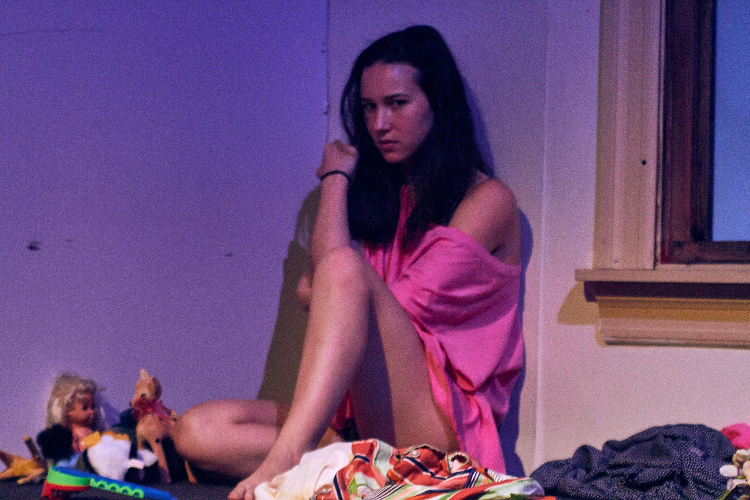 BOTTOM LINE: MEDEA/BRITNEY merges classical theatre and pop culture to comment on the judgment of prominent women in crisis.

Our society’s lurid fascination with unstable women, particularly those in the public eye, may well have its roots in the stories of classical theatre, most notably that of Euripides’ vengeful Medea. Despite centuries of cultural evolution and shifting gender politics, the trope of "woman come undone" still holds perverse appeal, and our culture is no less eager to judge such women, or to revel in their decline. Co-creators James Clements and Sophia Frank underscore these concepts in MEDEA/BRITNEY, blending the tragedy of Medea with the equally dramatic tale of Britney Spears’ 2008 mental breakdown in order to highlight themes of female rage, rebellion, and repression.

Combining original text with excerpts from Robin Robertson’s translation of Euripides, Heiner Mueller’s MEDEAPLAY, and Vanessa Grioriadis’s 2008 Rolling Stone Magazine article “The Tragedy of Britney Spears,” Clements and Frank draw striking comparisons between the tragic heroine and pop star’s respective downfalls. Dates on a projection screen, and the stage’s clutter of clothes, pill bottles, and beauty products, set the action in the bathroom of Spears’ Los Angeles home during the January 2008 police standoff that would lead to her involuntary psychiatric commitment and separation from her two young sons. Chain-smoking and clad in little more than an oversized pink t-shirt, Frank clothes Medea’s story in Spears’ aesthetic, directing Medea’s striking monologues to us as both her sympathizers and adversaries. Clements and Frank share Spears’ parallel story through multimedia, punctuating onstage sequences with voiceover commentary from Grioriadis’s article and court testimony from Spears’ father, and videos of Spears’s progression from wholesome child star to sexualized teen idol to turbulent adult.

The simple act of juxtaposing Medea and Britney’s stories speaks volumes about the similarities they share. Medea’s tirades against male infidelity, the struggles of motherhood, and the loss of personal identity could just as easily apply to Spears’ plight: each woman has been commodified and betrayed, forcibly barred from those she loves, pushed to the brink by her circumstances and vilified by the very culture that drove her to such extremes. The absence of other figures (Frank shouts at an invisible Jason or rocks babies in her empty arms) is poignant, if slightly off-putting: both women appear mildly deranged and desperately alone, railing less against one oppressor than the whole monolithic system. The piece draws similar parallels between Medea’s offstage murder of her children and Spears’ act of locking herself and her son in the bathroom against police intervention, allowing projected text and stylized video imagery to speak for these climactic private moments. Even the tales’ oddly transcendent endings seem fitting, our hindsight knowledge of Spears’ comeback forming in our minds a modern version of Medea’s triumphant deus ex machina exit.

At just 25 minutes, MEDEA/BRITNEY packs ample intellectual content into a brief run time; a slightly longer version might allow more room to delve into the cultural issues it presents, and to give Spears’ story more stage time in a Medea-heavy text. Nonetheless, by combining Classical and modern female archetypes, MEDEA/BRITNEY’s tortured heroine reminds us of the enduring struggles of outspoken women in a patriarchal world.