By William Shakespeare; Directed by Justin Ivan Brown
Produced by The New Collectives

Off Off Broadway, Classic
Runs through 5.11.19
IRT Theater, 154 Christopher Street 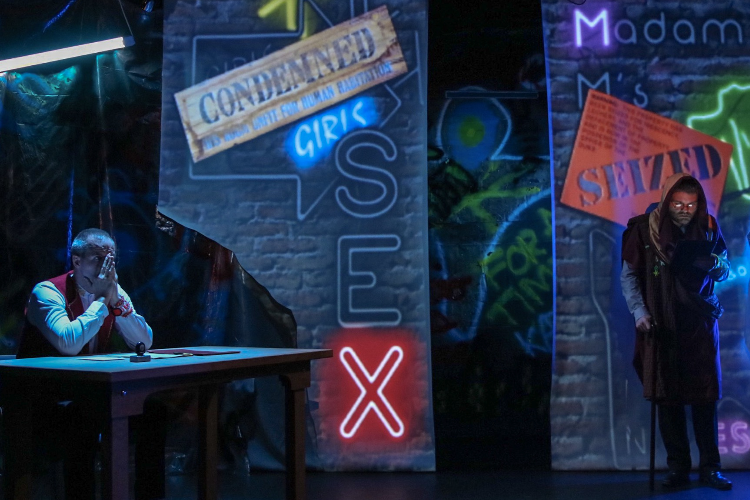 BOTTOM LINE: Measure for Measure feels shockingly relevant, even in a mixed-bag production.

Measure for Measure has long been dubbed one of Shakespeare’s genre-defying “problem plays,” but it seems more ripe now for revisiting than ever: its problems are still very much ours. When a young woman threatens to out a politician as the sexual predator he is, he tries to silence her with a dose of grim reality: “Who will believe thee, Isabel?” And in The New Collectives’ new Measure for Measure, rechristened M4M and set very much in the 21st century, he even presses a button under his desk that locks them in together In a creepy Matt Lauer throwback.

The abuses of power here feel all-too familiar. Tasked with enforcing a lax law prohibiting sex outside of marriage, the Duke of Vienna (Sam Leichter) jumps ship, leaving the puritanical Angelo in charge. Shortly thereafter, the devout Isabella (Alejandra Mangini) has barely gotten herself to a nunnery when she receives the bad news that Angelo’s sentenced her brother Claudio (Khiry Walker) to death on account of a pregnant girlfriend. When Isabella pleads Claudio’s case, a suddenly not-so-puritanical Angelo says he’ll reverse his decision on one condition: Isabella has to sleep with him. The way out of this Early Modern #metoo moment involves a bed trick (in which Angelo’s old flame takes Isabella’s place in the dark) and a fake beheading, but if Measure for Measure ever felt comfortable in the comedy column, its ending sure doesn’t sit right now: the Duke returns, revealing he’s been in disguise as Isabella’s friar friend all along, and announces that she will now marry him.

Shakespeare’s wokeness is debatable (see The Taming of the Shrew), but I have a hard time buying that he didn’t know what he was doing here with this pointed trio of betrayals of Isabella’s trust: first the sleazy Angelo, then the desperately unsupportive Claudio (who tells Isabella she should probably trade her body for his life), and finally the disappointing Duke. All men are the same in Shakespeare’s Vienna.

At least all leading men: a posse of comic figures like Pompey the clown and Elbow the police officer have been excised from this trimmed-down production, directed by Justin Ivan Brown. Without any glimpses into the world of decadent Vienna—none of the characters left to carry the play are remotely decadent, except maybe for Ben Watts’ droll, androgynous Lucio—the satirical edges fray into melodrama. And while the decision to make Angelo’s licentiousness manifest itself onstage in multiple acts of violence (including a particularly disturbing and realistic rape scene) might be theatrically effective, it also prevents the audience from enjoying any of the play’s acerbic lightness, or what’s left of it. There’s no danger of anyone in M4M’s audience feeling complicit in taking pleasure in Vienna’s raucous bawdiness.

Brown’s seven actors give sturdy but never revelatory performances, and some scenes feel more emotionally varied and urgent than others. Sarah Moore’s moodily moving Mariana stands out, here rendered explicitly as a battered woman unable to free herself from her faith in her abuser’s capacity for redemption. There’s nice work, too, from The New Collectives’ artistic director Giverny Petitmermet as the politician Escalus, trying hard to put her thumb on the scale in favor of justice.

Brown’s technology-heavy interpretation feels similarly competent but never fully realized. iPads and Skype sessions and intercoms work fine to tell the story, but it’s not clear whether they serve as a nod to Vienna’s surveillance state, a commentary on our distance from one another, or just a quick fix for a small stage and shrunken cast size. Ingrid Larson’s omnipresent projections, accompanied by German Martinez’s often startling soundscape and red-light district ambience from co-lighting designers Natali Arco and Jon Ontiveros, make the most out of a black box venue with limited playing space. In terrific and less-terrific productions of Measure for Measure, Isabella’s been telling us the truth around the world for 400 years. If only all of us had believed her all along.

(M4M plays at IRT Theater, 154 Christopher St., #3B, through May 11, 2019. The running time is 90 minutes with no intermission. Performances are Wednesdays through Saturdays at 8. Tickets are $20 and are available at thenewcollectives.com.)