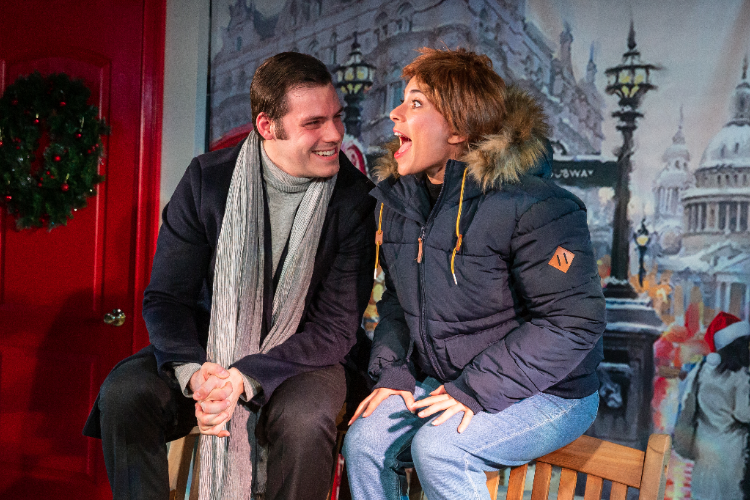 In 2003, the movie Love, Actually became an instant holiday classic. Funny, romantic, and tender, it delivered a message that we all needed in the aftermath of 9/11: there is more love in the world than hate. Sixteen cynical/challenging/tumultuous years later, the film may still be the perfect fare to “Netflix and chill,” but its cheesiness is more apparent, and thus more cringe-worthy. In response, Love Actually? The Unauthorized Musical Parody is uproariously funny and may actually enhance your love affair with the movie.

It’s been said that parody is an act of love. The show’s creators, Bob & Tobly McSmith and Basil Winterbottom, prove that here with a loving send up of every last detail. The film runs over two hours, and includes eight converging plotlines. The McSmiths manage to get it all into 90 minutes. Under the direction of Tim Drucker, the pacing, along with the actors’ larger than life impersonations of the film’s stars (they're listed according to each celeb's, rather than each character's, first name), make it feel as though we’re watching the film on fast-forward, pausing just long enough when the jokes are substantial enough for a musical number. My favorite is sung by the Laura Linney character (Joyah Spangler), in which the virtuoso of stage and screen asks herself what possessed her to accept such a nothing role in a silly rom-com.

The six-person ensemble is perfect. They mock the movie stars mercilessly while neatly capturing the quirky nuances that make them so loveable. One standout moment comes when the Keira Knightley character (Kayla Catan) learns through watching her wedding video that the best man is infatuated with her. Here, this becomes a dream ballet in which three actors impersonate Knightly, sporting identical Keira-esque smiles. I shudder to think what Knightley’s reaction would be were she to stumble upon this.

Every actor impersonates three or four members of the original cast. Catan is the stand out, playing Keira Knightley, then Alan Rickman’s beautiful assistant and would-be mistress, then Sam, Liam Neeson’s stepson who learns to play the drums for love. Daniel Hayward is also impressive as Alan Rickman (played as Severus Snape). The Snape send-up only goes to show that no matter what the late Rickman may have achieved in his long career, he will be forever remembered as the dark and enigmatic pedagogue of wizardry.

The hilarious Love Actually? is a welcome opportunity to poke fun at the cheesy movie that won us over when we were at our most vulnerable. If the movie lives on in your heart as a holiday classic, you will surely appreciate this riotous spoof. If you didn’t care for the movie, then you may not find much to admire here either; part of what we are asked to laugh at is ourselves for having been taken in by such sap. This parody gives us an opportunity to forsake our sentimentality while celebrating a film that we are embarrassed to admit we adore.